BY hellodrdavis on May 13, 2020 | Comments: Leave Comments
Related : Days of Our Lives, Soap Opera, Spoiler, Television 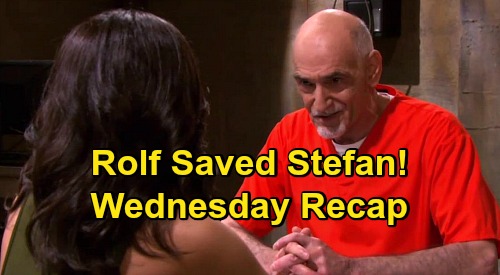 Days of Our Lives (DOOL) spoilers recap for Wednesday, May 13, reveal that Ciara Brady (Victoria Konefal) and Ben Weston (Robert Scott Wilson) canoodled in bed and talked about their awesome engagement last night. Ciara said that she was going to tell Hope Brady (Kristian Alfonso) that they were engaged, and Ben wondered if maybe she wanted to wait on that, but Ciara insisted.

Ben worried that Hope might not give her blessing on their engagement, but Ciara said that her mom just wants her to be happy. “There’s nothing anyone can say or do that will make me less devoted to you,” Ciara said. “You are the love of my life.” After declaring their love, Ben and Ciara hopped in the shower to get ready for their day.

At Statesville, Dr. Wilhelm Rolf (William Utay) visited with Gabi DiMera (Camila Banus), who demanded that he tell her the truth about Stefan DiMera (Brandon Barash). Gabi said that Stefan was back in Salem working in a garage and calling himself Jake Lambert (Brandon Barash). “You’re responsible for that, aren’t you?” Gabi said.

Rolf balked, saying that Stefan didn’t have a heart, and that he couldn’t have been brought back without one. “We all know you found a way to save him,” Gabi said. Rolf decided to play along and asked why Stefan would walk away from the DiMera empire to become a grease monkey. Gabi assume it was all part of some big plan.

After some back and forth, Rolf said that he did save Stefan’s life. Rolf led Gabi to believe that Jake was Stefan, but with amnesia. Gabi got excited, realizing that Stefan wasn’t faking it – he really had amnesia. Rolf suggested to Gabi that Stefan needed the serum to get his memories back.

Gabi told Rolf that she was his only shot of getting out of prison, and that she’d do that for him if he helped her restore Stefan’s memory. “Tell me where the serum is NOW,” Gabi said.

Off screen, Rolf and Gabi struck a deal, and Rolf said that the deal would stand even if the serum didn’t work. Gabi took off and Rolf wished her luck then said to himself that she’d need it.

At Jake’s garage, Jake told someone on the phone that “You have no idea what’s going on around here. Things are getting more complicated.” He hung up and mopped the floor where Gabi had fallen, laughing at the memory of her falling down.

Jake then made another call and left a message for someone saying, “This is getting old. You need to call me back.”

Afterwards, Jake slammed the phone down and cursed. Ben walked in and asked if that had to do with the two guys who beat him up. Jake said it was a telemarketer. Ben announced that he and Ciara were engaged, and that Ciara was going to tell her mom about it. Ben said that Hope had a problem with his history, then he told Jake about his past off-screen.

Jake gave Ben a little grief over his past, but in the end, he was ok with it and told Ben that he could keep his job. “At least we don’t wear neckties to work,” Jake joked. Ben then inquired about the woman in Jake’s life, but Jake stayed mum. Ben quipped that Jake wasn’t a big sharer.

At Hope’s house, Ciara arrived and quickly showed her mom the washer on her finger, then told her that she was now engaged to Ben. Hope was stoic and needed a moment to process the information. Ciara gushed about how the engagement went, and that the “ring” was a placeholder and was a washer from Bo Brady’s (Peter Reckell) bike.

Hope had to sit down, and Ciara worried that Hope couldn’t be happy about the engagement, but finally Hope said that she loved Ciara with all her heart, and that she saw how happy Ciara was.

Ciara and Hope hugged and talked over tea about planning the wedding. Ciara wished that Bo could walk her down the aisle, and she tearfully hugged her mom again. Hope then had an idea that involved Ben.

Back at Jake’s garage, Ben took a call from Ciara, who said that Hope wanted to take them out to celebrate their engagement. Ben tentatively asked if Hope knew they were engaged, and Ciara said yes. Ben was thrilled and told Jake the happy news. “Sounds like an easy-going lady,” Jake said. Ben took off.

Later, Jake worked alone in the garage, and Gabi appeared at the door. Gabi loaded a syringe full of serum and stuck the syringe in her purse. Gabi then walked in the garage, and Jake turned around, saw her, and sighed. “What the hell are you doing here,” Jake bellowed.

At Julie’s Place, Ben, Hope, and Ciara celebrated with champagne. Ben called Hope “Mrs. Brady,” but Hope said that Ben could call her Hope. Hope made a toast to the couple, and they all clinked glasses.

Rafe and Jack stepped away to get updates, and Jennifer told Chad to calm down. Chad said that he was losing it, and Jennifer said that they’d get Abigail back. Meanwhile, over at the DiMera mansion, Abigail emerged from the tunnels and asked Stefano DiMera’s (Joseph Mascolo) portrait how to get rid of Gabi.

Abigail then hid behind the couch when Kate DiMera (Lauren Koslow) waked in with a tea set.

Kate poured tea, and Abigail hallucinated and “saw” Gabi drugging a cup of tea. Abe Carver (James Reynolds) walked in and immediately got a phone message.

When he stepped away, Kate messed with the tea set and Abigail again hallucinated, thinking she was seeing Gabi drug the tea. Abe returned and took his tea, and Abigail rushed over and knocked the tea out of his hands.

A scuffle ensued, with Abigail insisting that Kate was Gabi and that she had drugged Abe’s tea. Abigail then attacked Kate, with Abe intervening. Afterwards, Kate called Chad, who was still at the police station and told him that Abigail was at the mansion and just tried to attack her. Chad took off for the mansion.

Jack and Jen regrouped at the police station and took off for the mansion as well. Once alone, Rafe got a phone call from someone and said, “You’ve gotta be kidding me!”

Back at the mansion, Chad rushed in and embraced Abigail, who was still confused about the whole situation. Abby insisted that Kate was Gabi and had tried to poison Abe. Chad vowed to get Abigail help. Abigail said she was scared.

Once alone, Kate and Abe talked, and Kate quipped that she hoped Abigail got the help she needed…in a locked room. Abe chastised Kate for her words, and Kate changed the subject to herself. “Do I get the job or not?” Kate asked.

Finally, Abby and Chad waited for Marlena Evans (Deidre Hall) at the hospital. Jack and Jennifer arrived on the scene and promised Abigail that they’d do whatever they could to help her. “We’re here for you. You know that, right?” Jennifer asked.

Suddenly, Abby hallucinated and “saw” a menacing Ben, Stefan, and Gabi. “Yes, I do,” Abigail told her mom.

That was a fantastic episode of Days of Our Lives! There’s plenty of great DOOL drama ahead for the remainder of the week, so stick with the NBC soap. We’ll be sure to keep you up to speed on the latest DOOL spoilers and news as well.