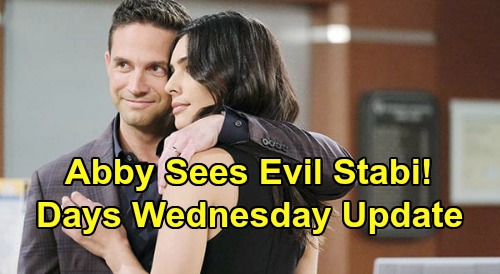 Days of Our Lives (DOOL) spoilers for update Wednesday, May 13, teases that Abigail DiMera (Kate Mansi) will surface after going missing at the hospital. Chad DiMera’s (Billy Flynn) been concerned about his wife, so he should be both relieved and even more fearful once he’s brought in the loop. That’s because Abigail’s about to launch a vicious attack on Kate Roberts (Lauren Koslow)!

DOOL fans can expect Abigail to have more delusions, so she’ll think Gabi DiMera’s (Camila Banus) drugging a cup of something in the study. Gabi will ridicule Abigail, but the whole incident will play out within Abby’s mind. Once Abigail decides she’s had enough, she’ll explode at Kate thinking she’s Gabi instead.

Abe Carver (James Reynolds) will be in the right place at the right time, so he’ll be able to rescue Kate before Abigail hurts her. After Abigail’s taken to the hospital, she’ll be surrounded by Chad, Jack Deveraux (Matthew Ashford) and Jennifer Deveraux (Melissa Reeves). They’ll probably want Abigail’s reassurance that she won’t run off like that again, but Abby’s attention will drift to another vision.

Days spoilers say both Gabi and Stefan DiMera (Brandon Barash) will be in Abigail’s next hallucination. Stefan and Gabi will looking gorgeous and formidable – just how “Stabi” fans like them! For anyone missing Gabi and Stefan scenes, it’ll provide a little taste even though they won’t technically be real.

Of course, Jake Lambert (Brandon Barash) is very real, but Gabi doesn’t buy for a second that he’s anyone besides her dead husband. That’s why Gabi arranged a meeting with Dr. Wilhelm Rolf (William Utay), who’ll agree to receive a visitor at Statesville.

Days of Our Lives spoilers say Gabi will put Dr. Rolf through the wringer as she tries to finger out how Stefan – who was brain dead and had a heart transplant – is back in Salem. Gabi will likely accuse Dr. Rolf of lying about not being able to save Stefan, but will he admit that’s true?

Regardless, Gabi will offer to pitch in with Jake’s memory later this week, so it sounds like she’ll believe he simply can’t remember their love story. Days of Our Lives spoilers say Gabi will keep fighting for the “Stabi” future she wants, but getting it won’t be as easy as she might’ve hoped.

In the meantime, Jake will deal with another Ben Weston (Robert Scott Wilson) interrogation. Some goons came after Ben and left him unconscious, but what did they want? That’s what Ben will keep trying to figure out on Wednesday. Ben will think Jake must know who those guys were working for and what they wanted him to hand over.

Jake will likely keep stonewalling Ben, but the walls are definitely closing in. It’s clear that Jake needs to hold up his end of the bargain with the thugs, who are working for someone mysterious.

Ben took the hit for Ben the first time around, but Jake may not be so lucky next time! More danger’s indeed brewing thanks to whatever Jake’s mixed up in.

Finally, Hope Brady (Kristian Alfonso) will be shocked by Ciara Brady’s (Victoria Konefal) engagement news. Ciara will sense some apprehension at first, but Hope will quickly move past it.

Despite Hope’s previous issues with Ben, she can see the deep love Ben and Ciara have for each other. Ciara’s bliss is what matters most of all, so Hope will hug her daughter and look forward to the wedding.

Days spoilers say Ciara’s engagement updates will go over just fine with Hope, but there’ll be other problems for “Cin” sooner or later. Ben and Ciara had better enjoy their happy DOOL romance while they still can! CDL’s your go-to source for entertaining Days of Our Lives spoilers, updates and news posts.