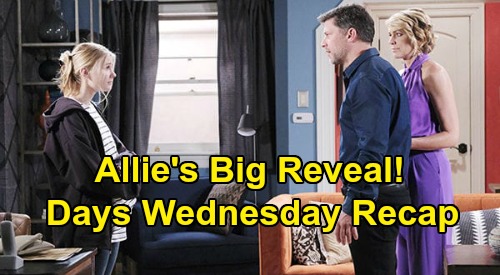 Days of Our Lives (DOOL) spoilers recap for Wednesday, June 10, reveal that Kate DiMera (Lauren Koslow) arrived at the penthouse to talk with John Black (Drake Hogestyn). Kate barged in wanting John to talk some sense into Hope Brady (Kristian Alfonso) and Steve Johnson (Stephen Nichols) and get them to accept the key to the city. John was unsympathetic and said “maybe” he’d help.

Kate left in a huff as Marlena walked in, fresh back from Bayview. Marlena told John that Claire Brady (Olivia Rose Keegan) would be living with them, and John was thrilled. John decided to go get flowers for Claire’s arrival.

At the DiMera mansion, Kate talked with Abe Carver (James Reynolds) by phone, telling him that she’s enlisted John’s help in getting Steve and Hope to attend the key to the city ceremony.

Suddenly, Lucas Horton (Brian Dattilo) burst in, upset with his mother for giving Allie Horton (Lindsay Arnold) money. Kate tried to deny it, but Lucas already knew that Kate had helped Allie out.

Lucas said that he had just flown in from London, where he went to get Allie. However, Allie wasn’t there when he arrived, and her roommate said she was traveling the world.

Lucas was furious with Kate, and he explained that Allie had been partying and shopping way too much, and that Kate had enabled her. Kate admitted that she gave Allie her credit card, and Lucas exploded.

Then Lucas calmed down a bit and decided that they could at least track Allie’s movements by looking at Kate’s credit card statement. Kate had the nerve to suggest that Lucas let Allie live her life as she sees fit, and Lucas scoffed, considering the source. Kate then looked up her charges and realized that Allie had booked a one-way flight…to Salem.

At the hospital, Kayla Brady (Mary Beth Evans) talked with Justin Kiriakis (Wally Kurth) by phone, then bumped into Steve, who was exiting the elevator. Steve apologized for being drunk the last time he saw Kayla, and Kayla wondered why Steve had been drinking.

Steve deflected the question, and the two reminisced about a time back in the 1980s when Steve took care of Kayla when she had drunk too much.

In town square, Rafe Hernandez (Galen Gering) and Hope waited for Justin to arrive. Rafe worried about what the judge’s ruling was, and soon Justin came along and broke horrible news to Rafe – Zoey Burge (Alyshia Osche) was awarded custody of David Ridgeway (Kyler Ends).

Rafe got agitated and upset, and he wondered if Justin could file an appeal. Justin said the ruling was final and said that the hand-off would be immediate, so Rafe needed to go home and get David ready.

Hope and Rafe went back to the Hernandez house, where Rafe was in a daze and terribly upset over what he had to do. Off-screen, Rafe told David what was about to happen, while Hope picked up David’s toys. Zoey came in and Hope begged her to reconsider, since Rafe was the only father David knew. Zoey refused.

Rafe walked in with David in tow, and Rafe said his final goodbyes, telling David that he’d come visit. Hope intervened and took David outside to where the court-appointed officer was waiting. That left Zoey and Rafe alone, and Rafe gave Zoey the cold shoulder while he finished packing up David’s toys.

Zoey promised to love David as if he was her own son, and she tried to hug Rafe, but Rafe stiffened and refused to hug her back. Zoey left, and Hope returned to comfort Rafe, who couldn’t believe that it was over and that David was gone. Hope hugged Rafe, as Rafe cried and sat there in total disbelief.

Back at the hospital, Justin arrived to find Steve and Kayla still talking. Steve quickly took off, and Justin learned about Steve’s drunken incident. Kayla learned about Rafe losing custody, which she wasn’t happy to hear.

Steve went to the penthouse to talk with John, and John immediately noticed that Steve looked hungover. John and Steve headed to town square and John shopped for flowers for Claire as they talked about Kate’s visit to John earlier. John also learned that Justin and Kayla were engaged.

At the Brady Pub, Kayla and Justin had lunch while Justin lamented about losing Rafe’s custody case. Talk then turned to their wedding date, and Justin suggested that they marry in July. Turns out, Steve and Kayla’s first wedding was in July, but Kayla said that it didn’t matter – they should go ahead. Justin and Kayla decided on July 10th.

At Eric Brady (Greg Vaughan) and Nicole Walker’s (Arianne Zucker) apartment, Allie greeted her very surprised Uncle Eric and Nicole. Allie wore a loose-fitting hoodie and carried a big bag over her stomach area. Eric said that they had just been talking about Sami Brady (Alison Sweeney), and Allie said, “What did mom do now?”

Allie said that her decision to come to Salem was a last-minute one, and she asked if she could crash with Nicole and Eric for a couple of months. Allie said that her mother was being demanding and a “control freak,” and that Sami didn’t like some of Allie’s decisions lately.

Eric will point out that Allie hasn’t gotten a job since graduating college, but Allie will say that she tried and couldn’t find one.

Allie will explain that her parents cut her off financially, and that they booked a flight for her from London to Italy, but that she decided to come here instead, and that she “had her ways” of paying for it. Allie said that Sami didn’t know that she was in Salem, and that Sami needed to take care of EJ DiMera (James Scott).

Allie went to the restroom so that Nicole and Eric could discuss her staying with them, and Nicole revealed that while she thought they weren’t getting the full story from Allie, she was ok with Allie staying at the apartment.

Allie returned to the room and asked if she can stay. Eric told her that she can, and Allie was thrilled, but she refrained from hugging Eric or Nicole.

Eric said that there will be some ground rules. First, Allie would have to call Sami and put her mind at ease. And second, no partying. Allie said that no partying wouldn’t be difficult because she’s not into partying these days. Eric asked why, and Allie unzipped her hoodie revealing her pregnant belly. “This,” Allie said.

There’s definitely a lot going on right now on Days of Our Lives, so stay tuned! We’ll give you updates as DOOL news comes in. Stick with the NBC soap and don’t forget to check CDL frequently for the latest Days of Our Lives spoilers, daily recaps, and news.