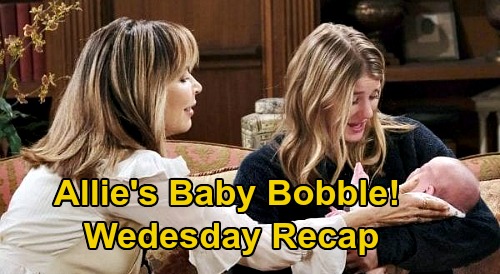 Eli wondered if Lani could forgive him, and Lani surprised Eli by asking if he could forgive her for putting him in an impossible situation. Lani revealed that Kristen DiMera (Stacy Haiduk) urged her to forgive Eli, and after a little back and forth, Lani and Eli made up.

At the Salem PD, Brady Black (Eric Martsolf) told Kristen that Belle Black (Martha Madison) was talking to DA Giddons right now offering his confession. Kristen didn’t like it, but she soon got worse news when Belle walked in followed shortly by Melinda Trask (Tina Huang), who announced that she was DA again and that she refused Brady’s confession.

Melinda fumed that Kristen pushed her daughter down a flight of stairs, and Brady said that Melinda shouldn’t make it personal. Melinda said that Haley Chen’s (Thia Megia) case might have been thrown out, but that this time Kristen wouldn’t get away with murder.

Melinda left, and Kristen lamented about all that she was going to lose now that Melinda was on her case.

Later, Melinda approached Lani and Eli in the squad room, announcing that she was the DA again and that her first order of business would be to throw the book at Kristen. Lani and Eli looked nervous as Melinda said that there was more evidence out there of Kristen’s guilt, and that she was going to find it.

Through their arguing, Sami learned that Eric Brady (Greg Vaughan) was leaving for the Congo, and she took off, leaving the baby behind.

Kate then took the baby and held him, and she wondered if Allie wanted to hold her baby. Allie acted skittish, and Kate got her to admit that she was afraid to hold him for fear that she’d never want to let go. Kate insisted that Allie give it a try, and she handed the baby to Allie, who appeared to love holding her son.

At Nicole Brady (Arianne Zucker) and Eric’s apartment, Nicole told Eric that Allie had asked her to raise her baby while Eric was in the Congo. Nicole said that she was leaning toward saying yes, and suddenly Sami banged on the door. Eric didn’t want to let Sami in, but eventually he did, and the two argued about Sami’s plan to take the baby to Italy.

Once Sami had gone, Eric and Nicole talked about how they’d spend their last day together before he left for Africa. Eric wondered if Nicole was really ok with this, and Nicole said that she loved Eric for wanting to make the world a better place.

Nicole teared up, saying that she would count the seconds until Eric came home. Nicole and Eric kissed and decided that this was a “see you later,” and not a “goodbye.”

At the Kiriakis mansion, Justin Kiriakis (Wally Kurth) got a visit from Bonnie Lockhart (Judi Evans) ahead of a hearing to receive her publisher’s counteroffer. Bonnie was excited and tried to hug Justin, but he pushed her away, saying they shouldn’t celebrate yet.

Back at the DiMera mansion, Kate put the baby down and asked if Allie wanted to be a part of her son’s life going forward. Allie said that she didn’t know. Soon, Sami arrived, and Allie explained that Justin was going to get a restraining order so that Sami couldn’t take the baby to Italy.

Sami said that she had just talked with Eric and Nicole, and that she was willing to not fight Allie’s desire to give the baby to Nicole. But Sami said that there was a catch. “You have to agree to live there with Nicole, too,” Sami told Allie.

Finally, in the park, Justin and Bonnie talked after the court hearing. Justin was still wearing his cowboy hat, and he happily showed Bonnie just how much money the publishers had agreed to pay her. Bonnie was thrilled, and she asked if she could hug Justin now. Bonnie proceeded to hug and lay a huge kiss on a shocked Justin.

That was a terrific episode of Days of Our Lives, and there’s much more coming tomorrow, so stay tuned! Remember, here at CDL we’ve got you covered with all the latest Days of Our Lives spoilers, daily episode recaps, and news.