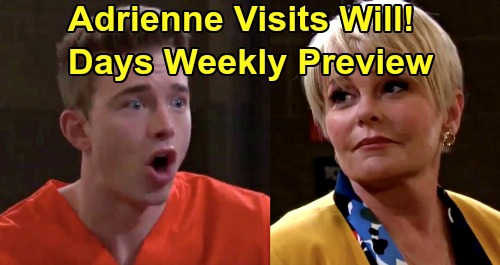 Days of Our Lives (DOOL) spoilers preview tease that the action is really heating up. The new DOOL preview promo for the week of January 13 promises both some serious rebounds and big returns, so let’s get right into it!

First off, the promo shows a rather humorous scene with Brady Black (Eric Martsolf) and Nicole Walker (Arianne Zucker) doing their best to make Kristen DiMera (Stacy Haiduk) terribly jealous of their “reunion.”

Of course, viewers know that Brady and Nicole aren’t really a couple – they’re just acting like a couple so that Brady can show Kristen that he’s moved on and so she’ll leave him alone.

In the promo, Brady and Nicole make out on a table as Kristen looks on in total disgust. This seems pretty unprofessional on Brady and Nicole’s part, so this could be a dream sequence of Kristen’s.

At any rate, no matter what Brady and Nicole do, it doesn’t seem like Kristen is going to be deterred. She considers Brady to be her soulmate and she desperately wants him back, so look for her to continue scheming in order to somehow be with Brady again.

Days spoilers say that by week’s end the two will reconnect over the death of their baby, so Nicole and Brady’s ruse may not last long.

Next, the new DOOL promo addresses what’s going on with Gabi DiMera (Camila Banus) and Eli Grant (Lamon Archey), and it’s a big development, as Eli is shown down on one knee proposing!

Eli asks Gabi if she’ll do him the honor of marrying him, although we should note that Gabi looks pretty taken aback by the whole thing, so we’ll see if she ultimately says yes.

Of course, all this seems to be precipitated by the fact that Lani Price (Sal Stowers) is back in town, which has Eli all ruffled. It looks like his reaction to seeing Lani again will be to dig in his heels and double down with Gabi.

But while all of this is going on, Lani will be telling JJ Deveraux (Casey Moss) what Gabi did to her last year.

Specifically, Lani will divulge to JJ that Gabi blackmailed her into dumping Eli at the altar, or else Gabi would kill Julie Williams (Susan Seaforth Hayes) with the pacemaker app on her phone.

JJ will be horrified by what Gabi has done, and during the week of January 13, he’ll set out to get hold of Gabi’s phone. He’ll want to try to disable the pacemaker app.

The new DOOL promo shows JJ paying Eli and Gabi a visit at the DiMera mansion, which could be his way of gaining access to Gabi’s smartphone. At any rate, he’s shown in the promo telling Eli that he can’t marry Gabi because Lani still loves him with all of her heart. Something tells us that won’t go over well with Gabi!

The promo also deals with some exciting returns to canvas. Days of Our Lives spoilers say that Eric Brady (Greg Vaughan) and Sarah Horton (Linsey Godfrey) will come home from Boston where their daughter has been treated for cancer.

The promo shows Eric ostensibly reuniting with Nicole in a tender fashion, but this could feasibly be a dream sequence on Nicole’s part, since Eric may still want nothing to do with Nicole.

At the prison, Sonny Kiriakis (Freddie Smith) and Will Horton (Chandler Massey) will meet for a sad task. They’ll need to sign their divorce papers, which will ultimately free Sonny up to pursue things with Evan Frears (Brock Kelly).

It looks like things will escalate into a shouting match, as Will yells at Sonny that Adrienne Kiriakis (Judi Evans) is gone and that she’s not coming back.

But the promo shows a curious final scene, as Will greets another visitor at Statesville, who turns around and appears to be Adrienne herself! She greets Will warmly, while Will stares in disbelief.

Now, this could certainly be a dream on Will’s part, but there’s another possibility, too. It could be Bonnie Lockhart (Judi Evans) who has come to see Will.

As DOOL viewers know, Bonnie has recently written a best seller and has been on a book tour, but it’s always possible that she decided to include Will’s tragic situation in her next book, and she’s paid him a visit for that reason.

We should note, though, that the haircut and clothing appear to be more fitting for this to be Adrienne, but you never know.