Days of Our Lives Spoilers: What Does Camila Banus Exit Mean For Brandon Barash – Does Jake Have Staying Power Without Gabi? 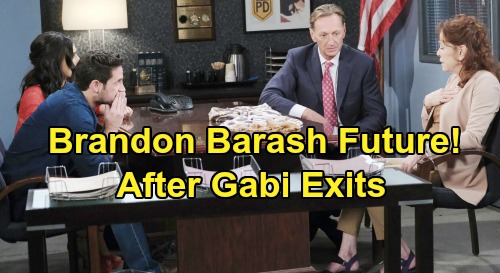 Days of Our Lives (DOOL) spoilers tease that Camila Banus will exit the role of Gabi DiMera in the coming months, so we should think about the main costar she leaves behind. What does Banus’ exit mean for Brandon Barash (Jake Lambert)? Let’s consider what the future holds for Jake and if he’ll have staying power in Salem.

When Barash took over the part of Stefan DiMera, he quickly won fans over. Barash and Banus’ onscreen chemistry was a huge reason why Stefan became popular. Without “Stabi,” there certainly wouldn’t have been such a push to bring Barash back.

However, many viewers felt it was a mistake to kill Stefan off and waste such a sizzling pairing. That led to Days of Our Lives calling Barash up and asking him to return.

DOOL writers worked with Barash to create the character of Jake – and Barash came back off as a recurring player. It’s worth mentioning that Barash still isn’t on contract, which seems to be his choice.

Since Days seemingly brought Barash back to appease “Stabi” fans, it may have thrown the writers a curveball when Banus rejected her pay cut – which is what DOOL insiders insist happened. The plan was probably to reunite Banus and Barash in some form eventually, even if it was through Gabi and Jake.

Although it does look like Jake and Gabi will have a short-lived romance, it obviously can’t last since Gabi’s leaving. Will Barash stick around without Banus? The fact that Jake will be revealed as Stefan’s identical twin may actually help here.

Now that Barash has come back as this new lovable mechanic, it seems like Jake can survive on his own – whereas Stefan probably couldn’t have.

Of course, there could always be some twin confusion or another twist that brings Stefan back later. If Days of Our Lives is able to work out a deal with Banus down the road, Gabi could still return and reunite with Jake or even Stefan.

Nevertheless, Banus is gone as of right now, so we have to mull over what that means for Barash. Days of Our Lives spoilers say it’ll mean trying some other love interests and stories for Jake, so there’ll be some new directions to take. There are no signs of Barash leaving Days at this point, so let’s hope that good news holds out.

We’ll deliver updates as other Days details roll in. DOOL fans won’t want to miss what’s in store as some summer bombs explode! Don’t forget to make CDL your hotspot for terrific Days of Our Lives spoilers, updates and news.