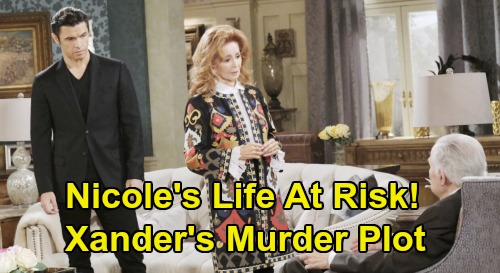 Days of Our Lives (DOOL) spoilers reveal that Xander Kiriakis (Paul Telfer) will grow increasingly concerned about his secret spilling. Nicole Walker’s (Arianne Zucker) already been sniffing around too much for Xander’s taste, but he’s fighting to stay in control of the situation. Xander got downright menacing with Dr. Raynor (Victoria Platt) when he stopped the elevator and delivered deadly threats.

However, Xander won’t be able to prevent Nicole from taking some bold next steps. Thanks to the birthmark clue, Nicole will soon be determined to prove Mackenzie “Mickey” Horton is actually Rachel Isabella DiMera Black. Days spoilers say Nicole won’t be satisfied until she uncovers the truth.

On March 19, an alarmed Xander will deliver some troubling updates to Victor Kiriakis (John Aniston). He’ll offer a warning about all the continued snooping and fear Nicole knows about the baby swap. What will Victor’s response be? Could he consider ordering Xander to take lethal action against Nicole?

Victor would do anything protect Maggie Kiriakis (Suzanne Rogers) from finding out the rest of the story. It’s bad enough that Maggie knows she killed Adrienne Kiriakis (Judi Evans).

Victor realizes it would absolutely shatter Maggie to know she killed her own grandchild, too. Not to mention the switch revelation would yank Mickey away from Sarah Horton (Linsey Godfrey) and cause more pain.

DOOL fans know there’s certainly a lot at stake for Xander and Victor. If Victor doesn’t order Nicole’s murder, could Xander consider the idea himself? After all, it wouldn’t be the first time Xander’s tried to kill Nicole!

Xander’s changed a great deal thanks to Sarah, but he still shows flashes of his true colors here and there. Nicole could be in grave danger if she’s not careful!

Xander obviously isn’t really going to kill Nicole, but he could at least try or contemplate it. He could also hold Nicole hostage until he could figure something else out.

The walls are bound to start closing in on Xander soon, so he’ll be in panic mode. Panicked Days of Our Lives characters tend to make bad decisions, so there’ll be lots of opportunities for drama.

Days of Our Lives spoilers say Nicole may get the DNA confirmation she’s seeking and plan to share her findings with Eric Brady (Greg Vaughan). If Xander can’t derail the DNA test results, Nicole may land in peril. There’s no predicting how far Xander and Victor will go to protect their twisted secret.

Will Nicole find herself in a life-threatening situation due to her knowledge of the baby switch? Will a deadly plot form after Nicole discovers the truth? As other Days news rolls in, don’t forget to drop by frequently for more DOOL details. CDL will have lots of Days of Our Lives spoilers, news and updates to read up on.