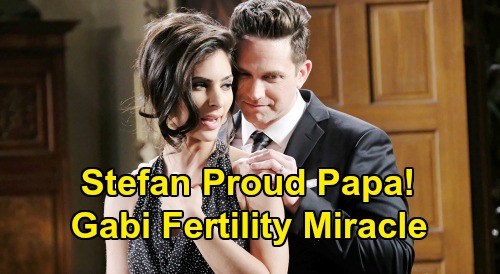 Days of Our Lives spoilers reveal it is almost time to see Brandon Barash’s return to television screens. We don’t know who he will be playing, but we hope it’s Stefan DiMera. Yes, he passed away after being declared brain-dead, but what if “Stabi” fans are in for a surprise? What could Stefan and Gabi Hernandez’s (Camila Banus) future look like?

DOOL spoilers reveal Gabi has never gotten over Stefan, even a year after his death. While she did steal Eli Grant (Lamon Archey), it was clear that even on her wedding day she was still grieving the loss of Stefan. After all, she wept in her wedding dress while talking to Stefan’s picture. That is not a woman who has moved on and she might never get over losing her soulmate.

In fact, her grief is what turned her into the vicious villain we see today. It comes from a source of agony and pain, although that doesn’t justify the exploding pacemaker scheme.

It is confirmed that Barash is returning in the near future. Although an exact date has not been announced yet, it is speculated that it could be next month. It would be perfect timing with the DiMera family reunion that Stefano DiMera (Stephen Nichols) has ordered brainwashed Chad DiMera (Billy Flynn) to organize.

It is possible that Stefan could return in some way. Even though he was declared brain-dead, what if things aren’t what they appeared to be when he was shot? Stranger things have happened on the soap, that’s for sure. If demonic possession, resurrection injections, brain-chipped essence transplants and the like are all possible, then so is Stefan being alive.

Maybe he was taken away and stowed somewhere, being reprogrammed. That definitely sounds like something Stefano and Dr. Wilhelm Rolf (William Utay) would do.

Days of Our Lives spoilers indicate that if Stefan is alive and returns as himself, then could he reconnect with his one true love? That is what “Stabi” fans are hoping for. Stefan and Gabi had incredible chemistry and a bond that remains unbroken, even after death.

For the sake of argument, let’s say Dr. Rolf brainwashed the real Stefan and he comes back not recognizing Gabi. However, the heart and true love is more powerful than any procedure, even by the sinister Dr. Rolf. That has been proven time and time again with other DOOL supercouples.

Days of Our Lives Spoilers: Building an Empire and a Stabi Family

So, what could Stefan and Gabi’s future look like if they reconnect? Well, for one thing, they will both want to take over the DiMera empire. However, they will also want to build a family.

Even though Gabi is infertile because of her prison horror attack, Kristen DiMera (Stacy Haiduk) was deemed infertile too. Even at her advanced age, Kristen still managed to conceive and give birth. Stefan and Gabi could have a specialist perform some magic fertility treatment, or use Dr. Rolf himself to give them a child.

There is also the chance that they might adopt or perhaps use a surrogate. One thing is for sure, as a couple, nothing will stop them from accomplishing their goals ever again.

Don’t miss all our hot Days of Our Lives spoilers here at CDL. We’ll pass along plenty of updates as other DOOL news rolls in.