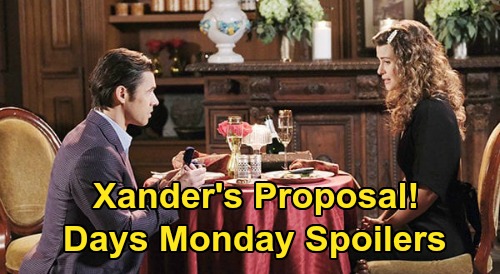 Days of Our Lives (DOOL) spoilers for Monday, March 16, tease that Xander Kiriakis (Paul Telfer) will take Sarah Horton (Linsey Godfrey) out to dinner as promised. Sarah was unsure about leaving Mackenzie “Mickey” Horton at the hospital, but Xander convinced her a break might be a good thing. Mickey will hopefully sleep through the night anyway, so this is Sarah’s chance to relax and feel normal again.

However, this will turn out to be anything but a normal night! Xander has a surprise in store for Sarah – and he’ll spring it on her after they enjoy their meal at the bistro. Days of Our Lives spoilers say Xander will make a sweet speech about his love for Sarah. He only wants to make Sarah happy and will spend the rest of his life doing it if she’ll let him.

Xander will get down on one knee and ask Sarah to marry him, so she’s sure to be blown away. Sarah will probably suggest it’s too soon, but Xander won’t think so. He knows for certain Sarah is the only woman for him, so he won’t see why they shouldn’t wed – at least if Sarah’s certain she wants Xander, too.

While Sarah mulls over this huge decision, Nicole Walker (Arianne Zucker) will try to hide her panic from Eric Brady (Greg Vaughan). Nicole just noticed Mickey’s heart-shaped birthmark and remembered Brady Black (Eric Martsolf) talking about the same one on Rachel Isabella DiMera Black’s neck. Nicole will reflect on all Xander’s suspicious behavior lately and worry that a baby swap has gone down. 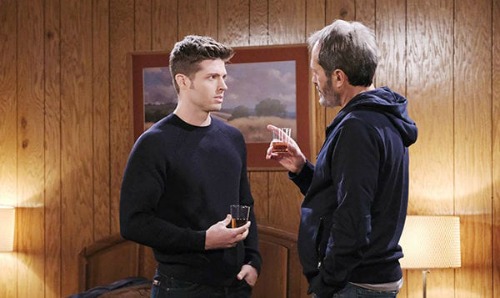 Days spoilers say Nicole will plan to seek evidence soon enough. Nicole will realize there’s a strong possibility that Mickey is actually Rachel, but she’ll need proof before she presents this story to anyone else. Since DOOL fans know there was indeed a baby switch, Nicole’s closing in on the explosive truth.

John will hope Kristen can help in some way, so we’ll see how this grilling session turns out. Regardless, John will remain focused on saving Marlena Evans (Deidre Hall) from Stefano’s evil clutches.

Finally, Orpheus (George DelHoyo) will have some advice for his son. This DOOL villain is one of the most manipulative around, so Evan Frears aka Christian Maddox (Brock Kelly) has a solid ally in his corner.

Orpheus hasn’t been a very good father as Days fans will soon find out. Evan’s been estranged from his dad for most of his life, but he knows he can turn to Orpheus when it counts.

Orpheus will give viewers updates on how he avoided death during his last stint in Salem, but he’ll eventually get down to business. If Evan’s going to keep David Ridgeway (Caleb and Kyler Ends), he’ll need a sneaky strategy. Orpheus will have some ideas to pass along, so Evan will listen up and prepare for the next step.

It sounds like some great scenes are coming up. As other news becomes available, don’t miss all our hot posts. CDL will have other Days of Our Lives spoilers, news and updates to deliver.