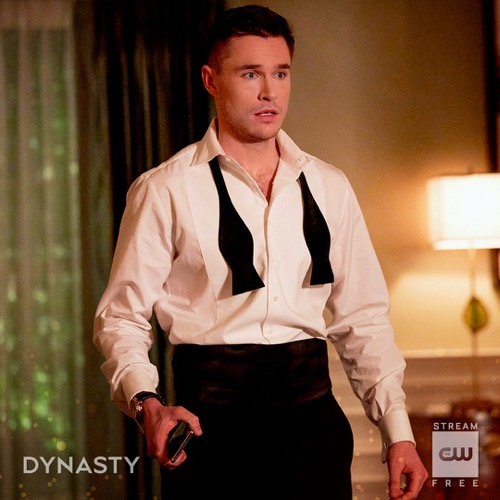 Tonight on the CW Dynasty the reboot of the 1980 series that followed the Carrington family airs with an all-new Friday, April 17, 2020, episode and we have your Dynasty recap below.  In tonight’s Dynasty season 3 episode 18 “You Make Being A Priest Sound Like Something Bad,” as per the CW synopsis, “Blake gets closer to finalizing a deal, while Cristal’s charity even approaches. Fallon looks for a wedding gift for Liam, while Sam receives a lesson in friendship from Colby.”

Krystle is working out, Blake is surprised that she is up so early. She says it is the fundraiser, she has a never-ending to-do list. He tells he got in late last night celebrating at the cigar club but once the ink is dry, Carrington Atlantic is his again. She tells him that it is wonderful. She reminds him that they have a dance lesson that evening together.

Fallon goes to see Culhane, she tells him that she needs a list of all the best present she bought him when they were dating because she accidentally saw the wedding present that Liam got her. She asks him what the most expensive gift was, he says it is not always about money. She sees mail, it is an invitation to Krystle’s gala and Kelly & Donna are performing, they are Liam’s favorite band. Fallon says this is the perfect present, she is going to get Kelly & Donna to perform at her wedding.

Sam & Kirby are together, she tests him and asks him who her favorite band is, he doesn’t know. She tells him they are not friends.

Fallon walks into the mansion to see Krystle, tells her she needs a huge favor, Kelly & Donna to perform at her wedding.

Krystle goes to the hospital and meets up with her priest and he tells her that he can’t stop thinking about their kiss. She says neither can she. He says it was a mistake, she says she knows. He says he took a vow of celibacy so they need to stop whatever this is. So, he thinks it would be best if he didn’t go to the gala, she says that is good because she plans on telling Blake about this.

Kirby and Adam make out in a storage room. A nurse bursts into the room, thankfully they were closed, she tells Adam that he is being summoned regarding stolen medication. Dr. Bailey tells Adam that there were witnesses so he might as well not deny it. He says it was for a shelter, she tells him it is enough. He asks for a warning, she tells him that a warning is for having sex in the supply closet. She says she will take pleasure in punishing him, it will be sad to see him go. He tells her that she is mad at him since he turned down her advances, the first week on the job.

Fallon goes to see Brooke, an agent, and tells her that she would like to hire Kelly & Donna, she will pay all travel and accommodations, she puts a cheque for five hundred thousand dollars on her desk. The woman tells Fallon that the ladies don’t travel anymore, it’s not about the money, they only do events that are meaningful to them.

Sam is swiping through his dating app trying to find someone to go to Taylor Swift with him, Kirby won’t go because she is still mad at him.

Blake is home, he brought Krystle a gift, a diamond necklace. Fallon walks in the door, she tells Krystle the necklace is nice bling. Fallon tells her that her father obviously did something wrong if he bought her a necklace like that for no reason. He is obviously hiding something.

Blake is in his office, he tells Anders that he has been screwed, he just found out that Carrington Atlanticoil tankers are being held up in Moldavia. The government wants to nationalize oil once and for all, the CA tankers reloaded and took off. The king won’t allow them outside Muldavian waters, and that is when Laura decides to sell him the company. Five hundred million dollars could be lost, and he is not just giving it to them. He tells Anders to clear his schedule, fuel up the jet, they are going to Moldavia.

Time for the dance class, Krystle asks Blake why he bought her the necklace, he says no specific reason. Then she asks him who he was looking at the contracts with yesterday. She goes on to say that Fallon said it looked like an apology gift, he gets mad, says he won’t buy her anything again, and walks out of the room.

Adam tells Kirby that he witnessed Krystle kissing a priest, she must be in a lot of pain.

Sam is having drinks with Jeff at the bar, Jeff wants to call it a night. An old friend of Jeff’s, Mina, walks into the bar, he says hello to her. She says she moved to town a week ago, and maybe they should catch up another time.

Krystle is in Blake’s office and finds a charm with LVK on it.

The next day, Krystle goes to see her priest and tells him that while she was with him the day before, her husband was having sex with Laura Van Kirk and it is humiliating. She says what they did was wrong, but different. He says she is right and asks what she is going to do. She says it is no coincidence that she was there the same day he got Carrington Atlantic back.

Fallon takes Kelly & Donna for a tour of the hospital wing, they tell her that they can’t wait to hear her speak at the gala.

Mina, Sam, and Jeff are sitting down at the bar, she finds out that he is married and then Sam excuses himself and tells Jeff that he will see him at the gala later that evening.

Time for the gala, she asks Krystle if she can give a speech. Krystle thanks her for the offer, but she has written her own speech.

Krystle goes upstairs with a suitcase, she asks where he is going. He says he is going to Moldavia with Anders, he has no choice and will be back as soon as he can, then make it up to her. She takes off the necklace and gives it to him, and tells him no thanks.

Dr. Bailey is at the gala, Adam gets a drink and flirts with her. She says she is open to working out an alternative punishment. He says she is very beautiful, but he is not going to give in to temptation tonight.

Fallon changes her dress and goes up to the podium to gather the guests’ attention and introduce herself. Then she introduces Krystle, but she doesn’t appear. Fallon goes on to give her speech.

Sam apologizes to Jeff, he knows he wanted to be alone with Mina, but he didn’t want to be alone. Sam asks where Alexis is, Jeff, says his marriage is complicated and seeing Mina made him realize, he only married Alexis because he thought he was dying.

Kirby sees Krystel and tells her that she is going to speak to Dr. Bailey and get her off Adam’s back or she will tell Blake about her committing adultery with the priest.

Krystle goes into the kitchen, she sees Fallon and Michael there. Fallon notices the necklace is gone, Krystle tells her that she was right. Fallon finds out that Donna is sick, she offers to replace her and sing with Kelly. It’s time for Krystle to dance with Blake, he is not there.

Krystle’s priest is there, he grabs her hand and dances with her. He says he couldn’t stay away from her. Fallon does a great job, she can really carry a tune. Later Krystle makes out with her priest.