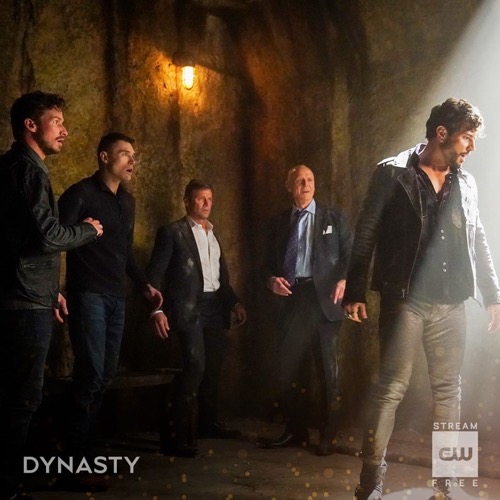 Tonight on the CW Dynasty the reboot of the 1980 series that followed the Carrington family airs with an all-new Friday, May 1, 2020, episode and we have your Dynasty recap below.  In tonight’s Dynasty season 3 episode 19 “Robin Hood Rescue,” as per the CW synopsis, “Adam and Liam rush to the aid of Blake and Anders, and Sam gets a special visit from his hero Danny Trejo.

Fallon faces legal repercussions for advice “Aunt Alexis” gives a listener on the new podcast and Culhane, Vanessa and Dominique celebrate the success of their reality show by looking ahead to what’s next. Cristal is forced to make a difficult decision.”

Blake and Anders are in a foreign dungeon, a guard comes in and tells them that the king can hear them, to be quiet. Blake tries to threaten the guard but it does no good. Anders is mad at Blake, he asks him if he understands the gravity of the situation.

Cristal is with Adam, they are looking at a map of the Kingdom of Moldavia and Cristal asks him what is their next move. Adam tells her she has to stay put, nobody can find out about this, they can’t have this leaked to the press. Cristal tells Adam this is just about his trying to get on daddy’s good side, and why is Liam there. Liam says he has been to Moldavia and has contacts there. The plan is for Blake and Liam to go to Moldavia and secretly break in and save Anders and Blake. Cristal wants Fallon involved, Adam says no.

Alexis is back on the radio, Fallon storms in and interrupts, she tells her that they have just been served. Apparently a woman named Joyce Doyle called in and asked Alexis for a career change, and she told her to get behind the wheel and not look back. Joyce took the advice and got into an accident and now she is suing the show and Fallon. Alexis says it is a frivolous charge.

Michael is having lunch with Vanessa and Dominique, and toast to getting it all when Kirby looks on at them. Dominque gets a text from Chase Cartof confirming a meeting at 3:30 pm, she tells Vanessa that success opens previously closed doors.

Sam sees Liam as he is about to leave and says he was invited to speak at a group of 30 under 30 and doesn’t know if he should do it. Liam says he has to go to the hanger. Sam asks where he is going, he says on a business trip. Sam says he is a terrible liar, this is about his bachelor party. Liam says yes and he is trying to keep it a secret.

Blake tells Anders that he is sorry that he dragged him into this. Blake asks him where would he be if could. Anders says he always wanted to open a beachfront restaurant in New Zealand, Blake says he always wanted to go to the moon. The guards return, the king has a proposition, call the tankers, return the oil, and they both can be free. Blake spits in the guard’s face, he hits Blake in the jaw. The guard tells Anders that when Blake wakes up let him know the king’s deal only lasts until midnight, after that he will be less diplomatic.

Blake is awake, he tells Anders he can stay there for weeks, he doesn’t care, he is not making a deal.

Evan visits Fallon, he says he knows about the lawsuit and has some thoughts. Evan tells Fallon that people cheer for the underdog, settle. In the meantime, Evan tells her to keep her eyes and ears on Alexis.

Dominique meets with Chase, he wants to help her to produce her own talk show. She says she will think about it and call him in a few days.

Cristal tries to call father Collins, she leaves him a message that Blake is missing and she thinks this is God’s way of punishing her, she can’t see him anymore and she doesn’t want him calling her back.

Liam and Adam are in the airplane, Liam walks in and says he wasn’t going to let him scout bachelor parties on his own. Liam tells him they are going to Moldavia to save Blake and Anders and try not to get them all killed.

Sam is drunk, he says he is staying in the plane, they can do the rescued.

Fallon and Alexis are in her office, Evan tells her he has good news for her, Joyce Doyle is settling for two million dollars. Alexis says she is not signing anything, it will ruin her career. Fallon says she is signing and she is not worried about the career that she has had for a week.

Anders is starting to panic, not Blake. The guard returns and throws Adam and Liam in the cell, then leaves. Blake turns to Anders and says at least the pilot told the family. Adam says at least they are all alive. Anders turns to him and says what is exactly plan B. Adam says Sam is still in the plane and can rescue them any moment, Anders says that would be plan C. In the plane, Sam took a pill and is hallucinating that he is in bed and that Danny Trejo is there with him. Danny tells him to grab the blueprints and break into the palace, save everyone. Danny tells him they need to figure out what he is good at and kick ass. Sam gets into the building and is crawling in their air vents.

Alexis says she is going to see Joyce Doyle, she is signing nothing. Alexis and Joyce meet, Fallon bursts in there and tells her to forget everything Alexis has said. Alexis and Fallon get into a fight and on accident, Alexis hits Joyce. Alexis and Fallon make a run for it.

Michael, Dominique, and Vanessa are in a boardroom and going over the contract. Dominique interrupts and says she needs more travel into next season, a private jet on standby, also some new cars would be nice, and some time off to pursue other projects.

In the jail cell, the guard takes a knife to Anders’ throat, Blake fakes a heart attack which distracts the guard and they are able to knock him out. Another guard comes in and Sam drops from the vent, then kicks him and knocks him out. Sam looks up and Danny is smiling, Sam is still high. Sam tells them all they have to go back in the vents, it is the way out. Everyone is out except for Adam, Sam tells him Goodluck.

Fallon and Alexis are outside of Joyce’s apartment, Alexis says she doesn’t want her show to end because she likes it. Then Alexis says the only thing good about being married to Blake is that she was respected in society. Alexis says kicking Joyce was an accident.

Alexis and Fallon go back into Joyce’s apartment, Fallon says that she noticed that when Alexis kicked her, she defended herself with her broken arm, and she is going to sue her for damages. Joyce says fine, she will drop the lawsuit.

Everyone is on the plane, they are still waiting for Adam. Liam says they are staying until it is no longer safe. A guard is running towards the plane, it is not a guard, it is Adam. Blake goes the go-ahead to take off.

Dominique finds out that there is going to be no show, the execs didn’t like her demands. Dominique says she doesn’t care, she will find something else to do. She turns to Michael and tells him that she doesn’t think there is any room for him in their new plans.

Adam finds out that Blake still has the oil, he is mad, he risked his life for his father’s greed.

Evan visits Fallon again, she tells him that Joyce is withdrawing her claim. He says that he wants to see her again. She tells him that she is getting married to the man she loves, and she doesn’t want to lead him on. He says he gets it, and tells her to have a good wedding. Evan calls Joyce and asks her what the hell is going on, if he doesn’t get to be Fallon’s hero then the deal is off.

At home, Liam tells Sam that he is a hero and he shouldn’t sell himself short anymore. Fallon walks in and Sam says he just saved Blake and Liam from a Moldavian prison.

Blake is in his office with Adam and Anders, he tells Adam he had a plan, he wouldn’t get hurt. He gifts Ada with a briefcase and tells him it is for his first day at Carrington Atlantic. Blake gives Anders a deed for a beachfront restaurant in New Zealand, for when he wants to retire. Blake goes into his bedroom and sees Cristal, he asks her why she didn’t tell him she was there. She says they are not happy, they don’t know who each other are anymore. He says then fight for them. She says she needs to be by herself, time to think, she is sorry. Cristal leaves.

Adam is with Kirby, he says it was always about the money, he took the job so he could get closer to Blake and make him pay one day.