Eastenders Spoilers: Gray’s Discovery Could Help Him Win Whitney’s Case – But There Might Be a Catch 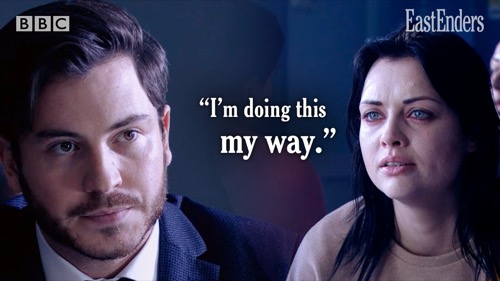 Eastenders spoilers for the week of March 16 reveal Gray Atkins (Toby-Alexander Smith) makes a discovery. It has to do with Leo King (Tom Wells) not exactly being a victim. It could help the attorney win Whitney Dean’s (Shona McGarty), but is it really as easy as that? Something tells us that this storyline isn’t over yet, not by a long shot. Things will probably get worse before they get better.

Leo King’s Relentless Stalking – Fans thought Leo’s death would finally mark the end of his relentless stalking of Whitney. He went to extreme measures to torment her, especially after he refused to recant her statement about his father’s abuse to her as a child. Sometimes, stalkers give up and focus on other things and people. This did not happen with Leo and he became increasingly creepy and dangerous.

Toward the end, Leo hid in Whitney’s attic so he could see and hear everything she was doing. That is, until the two faced each other in her kitchen. The battle ended up with Leo’s death and she went into a panic.

Whitney Dean’s Confession – Eastenders spoilers previously teased that Whitney would call someone for help dealing with the dead body. That person turned out to be Michael “Mick” Carter (Danny Dyer). However, things didn’t go according to plan. She wasn’t able to dispose of the knife and after the boat tragedy during the 35-anniversary special, she confessed to authorities.

Eastenders Spoilers: Gray Atkin’s Discovery – Despite no longer being at the law firm and them dropping Whitney as a client, Gray is still working on her case independently. It is teased that on Monday, March 16, Gray will make a discovery. It has to do with Leo not being the innocent victim that the prosecution wants to paint him to be. It could help Gray win Whitney’s case, but is it really going to be over that quickly?

More Story To Tell? – It is suggested that this story isn’t close to being over yet. In typical soap fashion, there will be some complications that arise. Some of these Gray will be prepared for, and others will come as a surprise. In the end, fans hope that Whitney goes free — and we mean that in every sense of the word, not just being released from jail.

What do you think is going to happen with Whitney Dean’s case? Can Gray Atkins really help her be released from jail? Can he prove that Leo King wasn’t an innocent victim and it is a case of self-defense? Viewers will have to keep watching the British soap opera to see how this story develops.