Eastenders Spoilers: Linda Bashed For Alcoholism, But Fires Back – But Will It Lead To Another Relapse? 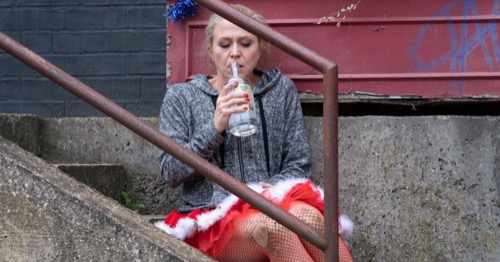 Eastenders spoilers for next week reveal Linda Carter (Kellie Bright) is happy that people are proud of her newfound sobriety. However, not all will be there to offer their support. One of the school parents that gave her a hard time will make a brutal comeback, bashing the recovering alcoholic. However, Linda fires back, but could this affect her sobriety? Can she handle the negativity and stay away from the booze?

Linda Carter’s Alcohol Storyline – For the past several months, Linda has been battling her demons and it seems that she is finally winning. As we speculated prior to the 35th-anniversary boat tragedy, the horrifying events would bring the Carter family back together.

However, beating alcoholism is no easy task and there is still a lot more story to tell.

Mick Carter Proud – Eastenders spoilers reveal that despite Michael “Mick” Carter (Danny Dyer) searching the rooms for hidden alcohol, he will tell Linda how proud he is of her. She is also getting support from others. While it’s easy to win a battle when everyone is rooting for you, what happens when people want you to fail? That is the tricky part and it will put Linda to the test.

Well done @kelliebright76! She’s only gone and won Best Soap Actor at the 2020 @TRICawards? !!
What a star. You truly deserve it. Congratulations from us all at #EastEnders!#TRICAwards pic.twitter.com/tzGAHFoM4E

Eastenders Spoilers: Bashed and Embarrassed – It is teased that one of the school mothers who had a beef with Linda will make a comeback. In fact, Linda tries to be the bigger person and apologizes for her previous drunken behavior when picking up Ollie Carter (Harry Farr) from school. However, the school parent can’t simply accept the apology. She has to rub things in Linda’s face.

Then later, she tries to publicly bash and embarrass Linda, but the recovering addict isn’t going to just stand there and take it.

Firing Back, But At What Cost? – It is suggested that Linda might face more negativity and backlash in the future. She has to be prepared to cope with this in healthy ways. Just abstaining from alcohol is really only part of the battle. She has to deal with the triggers, too and have a plan on how to handle those situations. If she doesn’t, then she will go right back to drinking.

Eastenders Spoilers: Future of Carter Family – While Linda does face an uphill battle, she does have the support of her family. Mick is rooting her on and so is her mother-in-law, Shirley Carter (Linda Henry). Now, what is interesting about this is that Shirley and Linda don’t exactly get along. They will probably never be friends, but they are family so Shirley will tell Linda not what she wants to hear, but what she needs to hear. There is a big difference, but it is one that could potentially save her family, as well as her life.