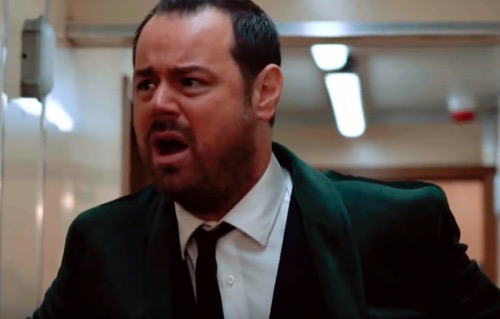 Eastenders spoilers reveal Whitney Dean (Shona McGarty) and Leo King (Tom Wells) battled it out, which led to the stalker’s death. Now the young woman is in a sticky predicament. Michael “Mick” Carter (Danny Dyer) ends up seeing the dead body on the kitchen floor. Will he help Whitney and if so, could there be consequences? Linda Carter’s (Kellie Bright) paranoia and jealousy could lead to another big mistake.

Eastenders Spoilers: Killing Leo King – Whitney has dealt with Leo for a long time now and he went to extremes. As fans know, he demanded she recants her statement about Leo’s father abusing her. He started romancing her and hid his true identity. When she discovered the horrifying truth, he began stalking her and things became dangerous. He even hid in Whitney’s attic.

As fans saw on Friday’s episode, Leo and Whitney engage in battle and it gets lethal. In self-defense, Whitney ends up killing her tormentor.

Mick Carter’s Discovery – Eastenders spoilers reveal Mick ends up at Whitney’s house and sees the dead body on the kitchen floor. It is teased that she will ask him for help. She doesn’t know what to do now that she has killed a man, even though it was self-defense.

It hasn’t been released on what Mick does, but based on the “telling glance” from the 35th-anniversary trailer, it seems he must do something about the body.

Eastenders Spoilers: Whitney Dean’s Telling Glance – In the 35th-anniversary trailer, Whitney walks in the pub. She and Mick give each other a look that says they share something. Neither says a word but Linda Carter (Kellie Bright) catches the knowing glance and of course, makes assumptions.

Once she gets too much alcohol in her system, Linda will verbalize her paranoia and then try to take care of business. She did this with the social worker and look at how terrible that turned out. It is likely she has some crazy idea of what Mick and Whitney are hiding. However, she might be surprised by the truth.

Linda Carter’s Assumption Ruins a Life? – It is possible that Linda’s assumptions and discoveries could end up ruining lives. While Mick goes into hero mode, could Linda say too much? That is what some fans are thinking and there is even a theory that Linda could send Whitney to prison. However, whether this actually happens or not remains to be seen.