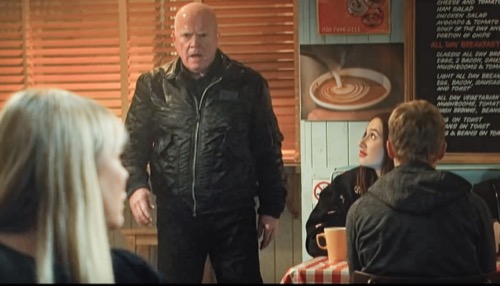 Eastenders spoilers reveal the 35th anniversary is going to be a lot more intense than fans realize. A lot of the information has revolved around the boat party. However, the trailer has been released and it shows the return of Phil Mitchell (Steve McFadden). What could happen when he returns?

Phil Mitchell Returns – Although not shown until the very end of the trailer, this is what has fans talking the most on social media right now. As fans recall, Phil fled Walford after being arrested on suspicion of murdering Keanu Taylor (Danny Walters). The young man is alive and has also come back, determined to get revenge.

In the trailer, Phil is shown walking in and Sharon Mitchell (Letitia Dean), still pregnant with Keanu’s baby, looks up to see him. The look on Phil’s face is a mixture of emotions, but mostly anger. That much is telling from his body language.

New Life Begins – Eastenders spoilers teased that a new life begins, which seems to indicate Sharon might give birth. With both Phil and Keanu in Walford (although one of them is secretly back), what does this mean for Sharon’s future? How will she move forward and do what is best for her youngest child?

Eastenders Spoilers: Family Means Everything – It is suggested by the narrator that “family means everything.” Some secrets will stay buried while others are exposed. What is interesting is that Phil shows up and faces Sharon. Could it be possible that the two will reconcile despite everything that has happened? That is what some fans are predicting.

Others feel that Phil blames Sharon for everything, including him being arrested. After all, if she hadn’t slept with Keanu in the first place then there would be no “murder.”

Living With the Consequences – It is revealed that some characters will have to live with the consequences of their actions. Phil is a man used to getting his way. However, with Keanu returning and wanting payback, could Phil be unaware that he has awoken a beast that nobody knew existed in the young man? Fans will have to keep watching to find out.

Be sure to catch up on everything happening with the soap right now. Come back here often for Eastenders spoilers news, updates, and rumors!