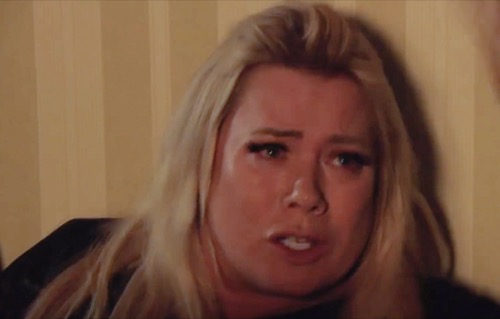 Eastenders spoilers for the week of February 17 reveal Sharon Mitchell (Letitia Dean) has a plan to flee town, even though she is heavily pregnant. Meanwhile, she gets cornered by Ben Mitchell (Max Bowden) when her water breaks amid the boat party chaos. Will he be forced to deliver her baby or could he use this as a way to draw out Keanu Taylor (Danny Walters) and get the upper hand?

Hunting Keanu Taylor – When Keanu left town after being “killed,” not many suspected he would be back. Especially Ben and Phil Mitchell (Steve McFadden).They also had no idea that his return would be about revenge and Callum Highway (Tony Clay) would become a hostage.

Ben and Callum’s situation is what brings back Phil from being on the run and he’s out for blood. The hunt for Keanu will end on The Queen Vic’s boat party, which turns chaotic and deadly. There will be one final showdown between Keanu and the Mitchell men. However, there is one hiccup that none of them are prepared for.

Sharon Mitchell’s Intention – Eastenders spoilers indicate Sharon plans on leaving the area for good. Keanu has promised her that he has come up with away. She tells Dennis Rickman, Jr. (Bleu Landau) about their intended exit now that they have reconciled. However, the young man ends up sharing the revelation with someone else and that could definitely put a snag in their scheme to flee.

Eastenders Spoilers: More Family Betrayal – At some point, Ben finds out about Sharon’s plan to run off with Keanu and corners her. He begins to lash out because, in his eyes, it’s just one more betrayal. Ben’s mindset is that Sharon cheating on Phil and getting pregnant wasn’t bad enough.

Now she’s going to be a party to blackmail, kidnapping and Callum possibly losing his life — even if she’s not aware of all of those facts. Like the 35th anniversary trailer teased, family means everything and Sharon keeps topping one family betrayal with another.

New Life and Impossible Choices – Eastenders spoilers reveal after Ben corners and confront Sharon, her water breaks. It is the worst time for her baby to come. Not only is she cornered by Ben, but the boat party chaos is about to end in terror and tragedy.

This will leave Ben with three choices. He can abandon her and risk both the lives of mother and baby. He can help deliver the newborn despite what Sharon has done to Phil and the Mitchell family. Or he can use the situation to his advantage by drawing Keanu out.

However, the last option will only work if Keanu is actually aware Sharon is in labor. He will also have to decide which is more important — his own life or the life of his child.