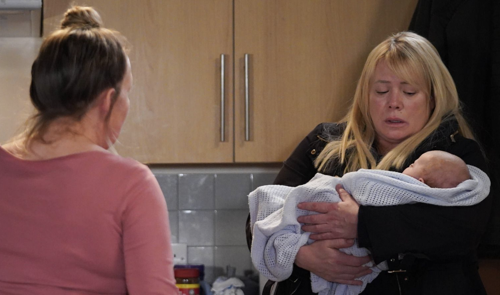 Eastenders spoilers for next week reveal Sharon Mitchell (Letitia Dean) is still having a difficult time coping with her son’s untimely death. As fans recall, he didn’t make it after the 35th-anniversary special aired. On that same night, Sharon gave birth. She hasn’t been able to cope with grief and a new baby at the same time. What will her huge heart-wrenching decision be? Could she give up her newborn for adoption?

Bittersweet Night – Prior to the boat tragedy, Sharon had made plans with Keanu Taylor (Danny Walters). Even though she was heavily pregnant with his baby, the two of them were going to flee. But only after Keanu got what he wanted, which led to Callum Highway’s (Tony Clay) kidnapping and blackmailing Ben Mitchell (Max Bowden).

Nothing went according to plan for many other characters, including Whitney Dean (Shona McGarty), Michael “Mick” Carter (Danny Dyer) and Linda Carter (Kellie Bright). Likewise, the night also didn’t go as planned for Keanu and Sharon. As fans recall, she unexpectedly gave birth during the boat tragedy.

Constant Reminder of Dennis Rickman’s Death – Eastenders spoilers reveal that Sharon still is struggling to cope. Now, it’s understandable that she is still grieving the loss of her older son, Dennis. That is something a parent never gets over; they just find ways to go on despite their agony and pain.

Eastenders Spoilers: Linda Bashed For Alcoholism, But Fires Back – But Will It Lead To Another Relapse? https://t.co/FvNXWXXBsA

Eastenders Spoilers: Sharon Mitchell Resents New Baby? – However, she has a newborn that needs her. Not only is she not taking care of the baby, she will only hold him when he is directly handed to her. Despite having the child in her arms, there seems to be a clear case of not bonding with the infant. That much is clear and it makes us wonder if she will ever be capable of being a proper mother to this new baby.

Even if she does manage to bond with the newborn, he was born on the same night that Dennis died. Each year, he will be a constant reminder of who she lost. Over the years, that might even result in her resenting the little boy.

Grieving Mother’s Heart-Wrenching Decision – Eastenders spoilers state that during the week of March 16, Sharon will learn that Dennis’ body is being released. This will cause her to make a huge heart-wrenching decision. It is also indicated that this choice will affect her for the rest of her life. Could it be possible that she realizes she is unable to properly care for her new baby? Will she end up putting up the baby boy for adoption? We will have to keep watching the British soap opera to see what happens next.