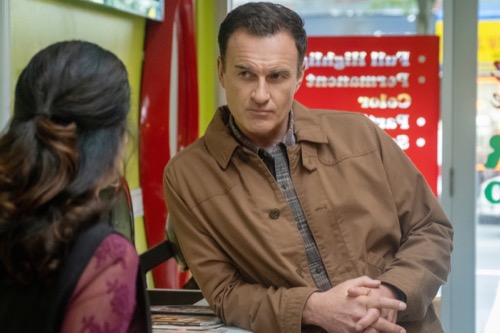 Tonight on CBS FBI airs with an all-new Tuesday, April 14, 2020, season 1 episode 12, “Ride Or Die” and we have your FBI recap below. In tonight’s FBI season 1 episode 12 as per the CBS synopsis, “After a manipulative student commits murder in a fit of jealousy, the team races to capture her before she escapes across the border. Also, Jess teaches Tali how to stand up to bullies.”

Two women and one man are in a car. They had to a parking garage where the man gets out and shoes another woman at point-blank range right in the face. She doesn’t die immediately one of the females in the car gets out and finishes her off with her heel.

Tali is at home telling her dad Jess about how the boys at school killed a bird with a stick. She was so angry. Jess finds this boy’s behavior very disturbing and wants to call the parents.

Jess arrives at the office to hear about his latest keys. A nurse and a pediatric therapist identified on a video in a parking garage with a male assailant carrying a gun. It appears their victim Melissa was engaged to the nurses’ ex. It appears this was a personal killing out of revenge.

Jess and the team head to speak with Melissa’s fiancé. He cannot believe that his ex Connie would do such a horrific thing. He wonders if he is in danger.

Jess and the team meet with. Connie’s mother at Connie’s apartment. She tells them she hasn’t spoken with Connie in 2 months. She insists her daughter is a good person. The team goes through the house and finds clothes with what could be blood stains that didn’t come out.

They meet with the second mother of the other woman Amber. She tells them her daughter is a good mother. She never met Connie. They ask to talk to Amber’s daughter. The mother agrees to let them speak to Zoey, her granddaughter.

Zooey tells them she and her mom and Connie would go to see a woman named Melissa. Meanwhile, Connie, Amber and the male assailant are hiding away at a hotel, changing their appearance.

The team heads to Melissa’s office. It has been trashed. Jess believes Connie is a true psychopath. They find out who the male is. His names is Jarrod. They head to meet his parents. They defend him, tell the team he is a good son. They call him. He speaks with Jess who tries to get him to make a deal. He will get off easier if he gives up Connie. He plans to meet them later.

Back at the hotel, Connie is on to Jarrod. He says he has to leave to go get beers. She has Amber talk him into staying to take a shower with her. When he is in the shower with her, Connie checks his phone. She knows he called his mother. She heads in there and kills him with a metal object. The girls leave him there.

The team arrives and finds his body. They get back to researching the two. It looks like Amber idolizes Connie. Their social media posts lead them to a school for Zooey.

Connie and Amber head to see Connie’s cousin. She begs for his help, the FBI is after her. He doesn’t want any part. His life is good now. Amber gets a call from a school she is trying to get her daughter into. She doesn’t know it is the team, pretending to be from the school to ping her location. They head there but they miss the girls.

On the road, the girls realize they are low on funds. Connie makes Amber prostitute herself at a truck stop. Connie watches video sent to her of her ex asking her to turn herself in.

The team tracks down Connie’s cousin. He admits he has no connection to cartels, he told Connie that to impress her. They tell him he does now with plans to make him reach out to Connie. They set it up but Amber is the only one to show. They grab her. She tells them where Connie is. They head to a hotel. She tells them it was all Amber. She killed Melissa. She has a video to prove it.

The team watches the video. They meet with Amber. She tells them she did it all but they know she didn’t, she is doing it because she was promised her daughter would get money to go to the best school. Jess isn’t going to give up. He is going to figure this out.

He meets with Connie. He talks to her about how Amber is going to turn on her and how her father abandoned her too. He is why she did all this. It is his fault. And now he gets to keep living with his new family. She snaps and admits she killed Melissa.

Jess looks into a way Zooey can still go to the school. He heads home to Tali. She tells him she dealt with the boys and the bird. The boy apologized. She thanks her dad for listening.