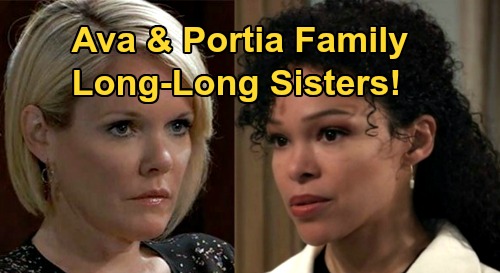 General Hospital (GH) spoilers reveal that Ava Jerome (Maura West) and Portia Robinson (Brook Kerr) will continue to clash. Naturally, we have to wonder why. Portia has been snapping at Ava from the moment she debuted. It’s bizarre since Ava’s been quite kind and supportive to Trina Robinson (Sydney Mikayla). You’d think that’d be the most important thing here, but Portia’s still not an Ava fan.

Of course, Trina’s allowed to hang out with Josslyn Jacks (Eden McCoy) at her mobster stepfather’s house. Sonny Corinthos (Maurice Benard) and his clan seem like far more dangerous people to be around. What’s the harm in Trina spending time with Ava and learning at the gallery? Their bond seems innocent, but Portia was concerned enough to seek advice from Carly Corinthos (Laura Wright).

Carly warned Portia not to forbid Trina from seeing Ava since that would just make their bond more tempting. Good grief! Ava is not the wicked witch of Port Charles, at least not anymore!

She brought Trina cookies recently for crying out loud. So why is General Hospital playing up this forced feud for no real reason? Could there actually be a reason after all?

Portia is a blank slate, so she’s a writer’s dream. The writing team can create any kind of connections they want – as they did with Portia, Marcus Taggert (Real Andrews) and Curtis Ashford (Donnell Turner).

Portia insisted that Curtis wasn’t Trina’s father, which could easily be a lie. However, we should also consider the possibility that it’s true. If that’s the case, who’s Trina’s mysterious relative in Port Charles?

Trina never figured out who that might be, so the door’s still wide open. All this Curtis stuff may be misdirection. Could Trina’s ancestry site hit actually be Ava? There’s a GH theory floating around that Ava might be Portia’s long-lost half-sister. That would explain Portia’s instant hatred for Ava – a classic sibling rivalry!

Portia could certainly pass as a biracial character, so Victor Jerome might be her biological father. This news would also tie Ava to Trina. Trina would be Ava’s niece, which might explain why Ava’s been able to bond with her so well. Ava has always thought Trina was a lot like Kiki Jerome (Hayley Erin), so that’s just one more way this could all come together.

General Hospital spoilers say there are still some mysteries to unravel when it comes to Portia, so it’s fun to mull over the possibilities. It would be a great GH twist if Portia turned out to be a Jerome. Do you think Ava and Portia could be long-lost half-sisters? Could Ava be Trina’s aunt?

As other updates become available, check back for all the latest GH details. CDL’s the place to be for fantastic General Hospital spoilers, updates and news.