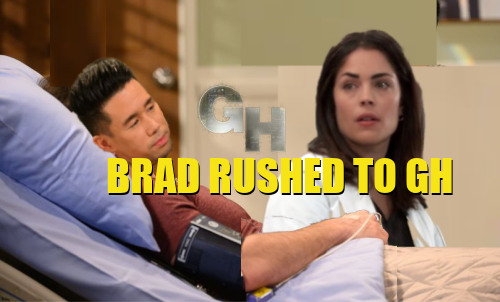 General Hospital (GH) spoilers tease that Britt Westbourne (Kelly Thiebaud) will get a blast from the past when someone surprising is rushed to GH. Britt will help care for a character that’s familiar to her as well as GH fans. It looks like Brad Cooper (Parry Shen) will have a medical crisis that warrants more than a trip to the prison infirmary, so Britt will be there to offer her old pal support.

On November 24, General Hospital spoilers say Britt will walk in on Brad as he wrestles with a nightmare. Of course, Britt couldn’t do that if Brad was back in his cell! All the puzzle pieces fit for Brad to be the patient who ties in with Britt’s history. Britt has been a good friend of Brad’s for years, but they’ll get the opportunity to reconnect soon enough.

It’s safe to say Lucas Jones (Matt Trudeau) will pay Brad a visit while he’s at GH. Now that Matt Trudeau has debuted as a Lucas recast, perhaps General Hospital could work toward a new chapter for “Brucas.” Although Lucas was furious over Brad’s baby swap lies, there was still some lingering love when Brad was shipped off to Pentonville.

There’s still hope for Brad and Lucas’ future once Brad’s ultimately released from prison – whenever that may be. For now, Lucas may check on Brad following this apparent medical crisis. Although there’ll inevitably be some tension, it’s nice to know Brad and Lucas will have an opportunity to share some new scenes together.

Naturally, we have to wonder why Brad will land at GH. Could Brad get his hands on drugs behind bars? Since Cyrus Renault (Jeff Kober) has so many connections at Pentonville, it’s possible Brad will become another overdose victim. Maybe Brad’s been so distraught over losing Lucas and their family with Wiley Quartermaine-Corinthos (Erik and Theo Olson) that he turned to drugs as a way to cope.

Whatever the case, it seems likely Brad’s nightmare will be about the pain he caused Lucas. Maybe Nelle Benson Jerome (Chloe Lanier) could even haunt Brad’s dreams! General Hospital spoilers say Britt will be there for Brad, so let’s hope he can find a way forward – maybe even with Lucas once Brad’s a free man again.

We’ll keep you in the loop as other GH news and updates become available. General Hospital fans won’t want to miss the twists and turns ahead in Port Charles. CDL will have tons of other sizzling General Hospital spoilers, updates and news for you, so be sure to make us your top source.