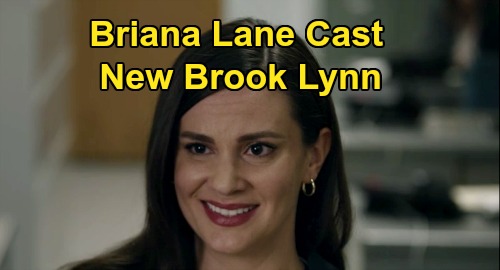 General Hospital (GH) spoilers has some news to pass on about Briana Lane who is now playing Brook Lynn Quartermaine (Amanda Setton) – a major recast with her first airdate August 6. As you might have heard, Amanda Setton, who portrays Brook Lynn Quartermaine on the ABC soap, is pregnant and out on maternity leave at GH for the foreseeable future, but her leave is only temporary.

And SOD is reporting that actress Briana Lane has taken over the role of Brook Lynn for the time being.

Most recently, Briana Lane has appeared in the TV series Solve, American Housewife, and she appeared in American Horror Story back in 2019. Briana did briefly appear on Days of Our Lives back in 2006 on one episode as Hope’s double, but other than that, she’s new to daytime.

Amanda Setton is temporarily vacating the role of Brook Lynn as she takes maternity leave. Amanda and her husband are expecting their third child, and due to all the unknowns with COVID-19 and its effect on expectant mothers and babies, it looks like she won’t be returning to set until after the baby is born.

Amanda revealed that she’ll really miss being on set and working with her GH family. “I have missed and will continue to miss my interactions and collaboration with all of them during this time,” Amanda told SOD.

Amanda described Brook Lynn as a “fierce, feisty, flawed, and lovable character with a heart of gold.”

As for her temporarily replacement Briana Lane, Amanda said that she can’t wait to see what Briana brings to the character of Brook Lynn. “I’m sure she will do an incredible job and will bring her own interpretations to this fun and complex character,” Amanda said. “I’ll be watching and rooting for her all the way!”

Amanda also thanked fans for embracing her and Brook Lynn so much. Amanda joined GH in 2019 in the role of Brook Lynn Ashton, who subsequently took on the Quartermaine name.

As GH viewers know, on the show Brook Lynn has just found out that Valentin Cassadine (James Patrick Stuart) has possession of her former ELQ shares, and she’s agreed to keep this fact from her dad Ned Quartermaine (Wally Kurth), but it doesn’t seem like it’s going to stay a secret for long!

We look forward to seeing Briana Lane’s take on the character of Brook Lynn, and we wish Amanda Setton all the best during her maternity leave! Stay tuned to the ABC soap and don’t forget to check CDL often for the latest General Hospital spoilers, daily episode recaps, and news.