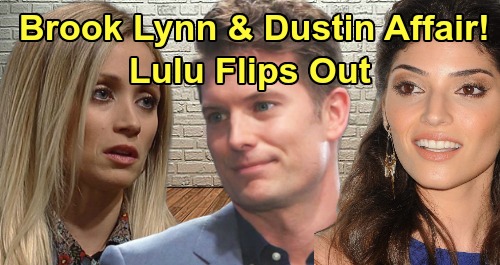 General Hospital (GH) spoilers tease that Brook Lynn Ashton (Amanda Setton) will cause another round of drama. She’s got a big surprise in store – and it could create chaos in Lulu Spencer’s (Emme Rylan) love life! On January 13, Brook Lynn will reveal this surprise of hers. In the same episode, Dustin Phillips’ (Mark Lawson) past will come back to haunt him.

Of course, we’ve also got 2020 preview info that points to someone resurfacing from either Lulu or Dustin’s history. It’s going to create a challenge they have to tackle together. That brings us to what happens after Brook Lynn’s surprise and Dustin’s blast from the past.

Lulu will end up demanding answers and having her patience pushed to her limit. When you add all this up, it seems likely Brook Lynn was romantically involved with Dustin at some point.

It’d certainly be a smart move from GH’s writing team. Dustin needs more connections in town, so this could add some depth. It could also rev up the conflict between Lulu and Brook Lynn, which would be great for drama’s sake.

Brook Lynn will probably gloat about having Dustin first. She may even be tempted to try and get him back! Dustin seems all in on his new relationship with Lulu, but that doesn’t mean Brook Lynn won’t cause a setback or two.

Lulu and Dustin will likely work through this obstacle, but the mayhem should be exciting to watch in the meantime.

As for Brook Lynn, she seems poised to have a fling with Julian Jerome (William deVry). General Hospital spoilers say sparks will start flying for Julian soon – and there’s a good chance Brook Lynn will be the one who brings those sparks.

The attraction will catch Julian off guard, but a casual romance could be exactly what they both need at the moment. It’s possible Brook Lynn and Julian’s relationship will turn into something more meaningful, but they can at least hook up and have a little fun!