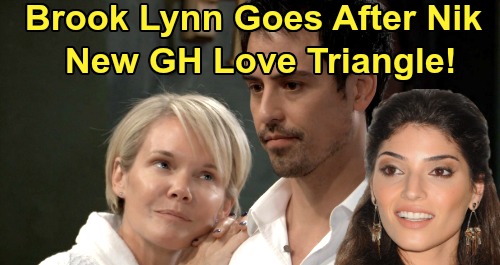 General Hospital (GH) spoilers tease that Ava Jerome’s (Maura West) plan could hit a few snags. She’s all about power and revenge right now, but love could strike when she least expects it. After all, Ava cared for Nikolas Cassadine (Marcus Coloma) before his death.

In fact, Ava already seemed shaken up by their kiss after they tied the knot. It’s clear that there’s a spark here, so let’s add some fuel to the fire. General Hospital spoilers say Ava will have a trip in mind during the week of January 13-17.

If Nik goes on that trip with Ava, it could bring them closer and help them settle the tension.

GH fans can expect Ava to build trust with Nikolas, which could lead to her trusting him back. Love could foil Ava’s vengeance scheme, but there could be a surprise factor she didn’t consider.

Will Ava have some competition for Nikolas’ heart? She just might based on a new GH preview video for Monday, January 13.

In the clip, Brook Lynn Ashton (Amanda Setton) delivers what she views as really good news to Tracy Quartermaine (Jane Elliot). She reveals that Nikolas is alive – to which Tracy replies, “So?” Classic Tracy!

Brook Lynn is annoyed and points out that she thought Tracy might want to text Luke Spencer (Anthony Geary). She notes that Luke and Nik had a lot of history, but Tracy continues to brush off the matter.

After Tracy suggests Lulu Spencer’s (Emme Rylan) surely taken care of it by now, Brook Lynn gets even further agitated. When pressed to disclose why she’s so touchy, Brook Lynn offers an answer that could serve as a hint about what’s ahead.

Brook Lynn says, “Call me sentimental, OK? I’m just a little emotional that a guy who I thought was dead for three years just called out of the blue to say ‘hi’ – and ask me how I’m doing, which is kind of crazy when you think about it since no one in our family has bothered to say those words to me since I’ve been back.”

Nikolas and Brook Lynn had a short-lived romantic connection once upon a time. Could they be on the verge of reigniting their spark? Brook Lynn was clearly emotionally affected by Nik’s return.

She also feels like Nikolas cares about her and shows concern for her in a way that others don’t. This could set up an interesting rivalry if Brook Lynn goes after married Nik – particularly if Ava’s feelings for Nikolas develop faster than his own for Ava.

It could lead to some jealousy of Ava’s part and set up quite a war with Brook Lynn. Love triangles are always fun, so maybe GH should kick off a new one!