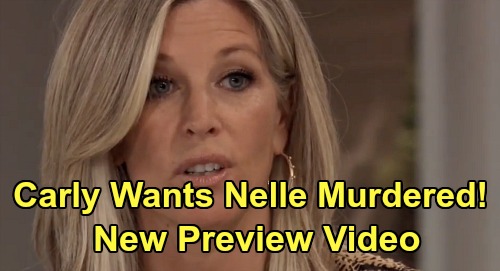 General Hospital (GH) spoilers sneak peek preview video teases that Carly Corinthos (Laura Wright) will feel like Nelle Benson Archer (Chloe Lanier) has crossed one too many lines. Nelle has tormented Carly’s family for far too long, so Carly will feel like enough is enough. Something has to be done about Carly’s fierce little blonde enemy.

Carly will be overjoyed for Michael Corinthos (Chad Duell), but she’ll still be heartbroken over what Lucas Jones (Ryan Carnes) is going through. She’ll feel like Lucas is suffering is all because of Nelle, the mastermind of the baby swap scheme. Carly will rant to Sonny Corinthos (Maurice Benard) and run down the list of all Nelle’s horrible offenses.

General Hospital recently put out a preview video for the episode airing Monday, February 24. In the clip, Carly has clearly reached her breaking point when it comes to Nelle. “She’s determined to destroy our family,” Carly insists. “She gaslight me and had me sent away. She nearly killed Michael, and now she kept our grandson from us for two years!”

Sonny quickly points out that Nelle’s heading back to prison and Michael got his son back. He’ll assure Carly that Nelle lost and they won, but Carly won’t be so sure.

It looks like Nelle just might based on her latest strategy. She’s trying to act like she’s just as much of a victim as Michael and Lucas. Nelle wants to pin the whole baby switch on Brad and hopefully get off scot-free.

Since Nelle’s such a crafty character, she could easily score her freedom and find herself right back in the Corinthos clan’s orbit.

Nelle could go after custody of Wiley Corinthos (Erik and Theo Olson) and cause plenty more drama, so it’s easy to see why Carly will be concerned. Not to mention Carly understandably holds a serious grudge!

Nelle went from being a scheming pain to a full-blown psycho – one that Carly would like to be rid of permanently. General Hospital spoilers, updates and news hint at some major Nelle danger.

At the end of this GH sneak peek preview video, Carly makes what appears to be a deadly threat. She says, “Someone has to stop Nelle…for good.” The only way to truly do that would be to murder Nelle, so Carly may consider pushing Sonny and Jason Morgan (Steve Burton) to take care of it. It’s an extreme step, but desperate times call for desperate measures!

General Hospital has some shockers and shakeups in store, so stay tuned. As other updates and news come in, don’t forget to stop be CDL regularly for some hot General Hospital spoilers.