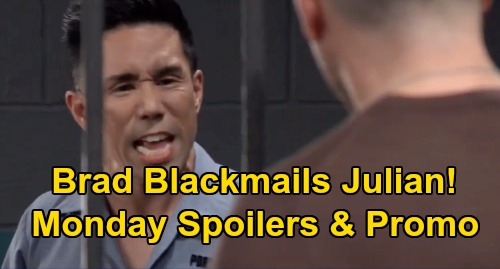 It was of Ava Jerome (Maura West) kissing Franco Baldwin’s (Roger Howarth) cheek – and it seemed to give Nik an idea of how to activate that infidelity clause in the post-nup.

On Monday, Nikolas will seek out Elizabeth Baldwin (Rebecca Herbst) and insist he needs her help. Of course, it’s not wise to just blurt out cheating accusations based on a pic, especially one that’s not even really scandalous.

Nikolas has to be smart and plant some doubts along the way. He may meet with Liz under the guise of something else and later mention he suspects Ava’s being unfaithful with someone.

Whatever the case, Nikolas will have a plot in mind and should take the first step. Meanwhile, Ava will get a few ideas as well. As Ava chats with Franco, he’ll fill her in on the affair Nikolas and Liz had once upon a time.

Ava will seem quite intrigued by this news and will form her own plan to trigger the infidelity clause. Neither Ava nor Nikolas wants to be married, so they’ll be scheming to get out of this while keeping a fortune.

In lockup, Brad Cooper (Parry Shen) will get a visit from Julian Jerome (William deVry). Naturally, Julian will want to make sure his name is kept out of all this baby swap drama.

Brad will snarl that he lost everything, but Julian will fire back that it’s on Brad. It’s not Julian’s fault that Brad dragged him into such a huge mess. Julian will urge Brad to keep him out of this – for Lucas Jones’ (Ryan Carnes) sake if nothing else.

However, General Hospital spoilers say Brad will blackmail Julian – and will protect him on one condition. Julian will have to get Brad a lawyer that can help him beat the charges or else Julian will go down, too.

Next, Willow Tait (Katelyn MacMullen) will remain a train wreck over all the grief she’s dealing with. Once she’s home from GH, Harrison Chase (Josh Swickard) will continue to offer support.

Chase will think they can work through this together. When Willow admits she doesn’t know what she needs to do, Chase will beg her to let him help. He’ll probably want to just take this one step at a time and handle it as best as they can.

Over with Carly Corinthos (Laura Wright), she’ll once again rant about Nelle Benson Archer’s (Chloe Lanier) deception. During a conversation with Sonny Corinthos (Maurice Benard), Carly will contend that Nelle was the mastermind behind everything.

Carly feels like she was Nelle’s real target here. Nelle wanted Michael Corinthos (Chad Duell) to suffer, but Carly has always been her true enemy.

Speaking of Michael, he’ll find himself feeling a bit torn in Monday’s episode. Michael will have a sweet morning with Wiley Cooper-Jones (Erik and Theo Olson) – their first morning now that he knows Wiley is his son.

Despite Michael’s happiness, he’ll also battle doubts. Michael will open up to Jason Morgan (Steve Burton) and worry that he won’t be enough for Wiley.

Naturally, General Hospital spoilers say Jason will shut down those concerns. He’ll feel certain Michael’s going to be an excellent father. Michael’s already proved it by showering his godson with love and can do that even more as Wiley’s bio dad.

As for Monica Quartermaine (Leslie Charleson), she’ll get some exciting updates on Monday. It sounds like Monica will learn Michael’s son is alive and well, so she’ll be thrilled for him.

This is a complicated situation, but it’s good that Wiley is finally back with Michael where he belongs. Alas, that bliss may not last long if Nelle has anything to say about it! General Hospital spoilers say more chaos is looming, so check CDL often for the latest GH updates and news.