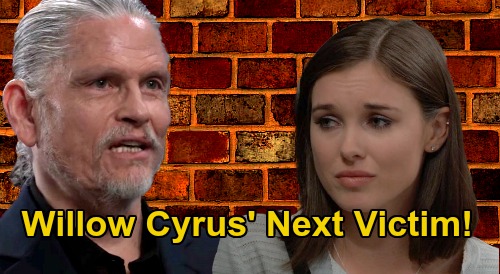 At one point, Harmony cryptically suggested there were no guarantees about the future. As a worried mom, Harmony was glad Harrison Chase (Josh Swickard) would be there to protect Willow. Of course, things have changed drastically thanks to Chase and Sasha Gilmore’s (Sofia Mattsson) fake affair.

Although Willow still loves Chase, he hurt her deeply and she can no longer trust him. Willow values Michael Corinthos (Chad Duell) as a friend and Wiley Quartermaine-Corinthos’ (Erik and Theo Olson) loving father. She insisted she was in awe of Michael’s integrity, so Michael’s certainly more trustworthy than Chase right now.

Chase wanted to push Willow into a marriage with Michael – and the plan paid off. Willow and Michael now find themselves navigating life as newlyweds, which should bring some interesting hurdles and awkwardness.

Harmony was already worried about her link to Cyrus posing a threat. Now Willow will face another threat through her connection to Michael, Sonny Corinthos’ (Maurice Benard) son. This could even bring a greater risk to Wiley, so it seems like a bad situation all around.

Michael suggested that Willow’s life would change drastically once she was part of his world. Does Willow understand just how much? Michael’s a sweet guy and can be pretty protective when he wants to be.

Even so, Chase is a detective and isn’t related to Sonny – the man Cyrus wants to take down. It terms of protection, Chase was certainly in a better position to keep Willow safe.

What happens if Michael can’t protect Willow from Cyrus’ wrath? Will Willow end up wounded and fighting for her life? That’d bring some excellent opportunities for GH drama.

Chase would be furious with Michael for not making Willow’s safety the priority. Michael realize could also start to realize he has more than friendly feelings for Willow. Nearly losing Willow could make Michael see the light.

Between Harmony and Michael’s link to Sonny, there are some logical reasons for Willow to wind up Cyrus’ target. If wounded Willow lands at GH, will Chase blame Michael? Could Willow’s terrible ordeal pull Michael closer? As other General Hospital news comes in, we’ll deliver updates.