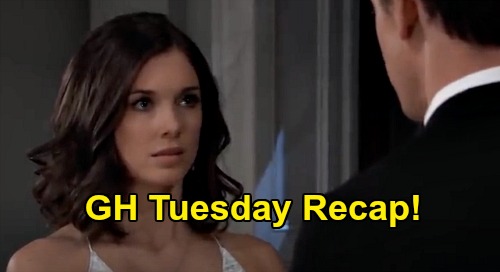 General Hospital (GH) spoilers recap for Tuesday, May 12, reveal that Nelle Benson Archer (Chloe Lanier) listened undetected as Brook Lynn Quartermaine (Amanda Setton) ran through all of Julian Jerome’s (William deVry) wrongdoings at the pub. Julian suddenly got a call from Leo Falconeri (Aaron Bradshaw) who was upset about something Ned Quartermaine (Wally Kurth) did. Julian and Brook Lynn took off for the Q mansion.

Carly was immediately happy, but Sonny wanted a private word with Michael. Carly told Willow that she was grateful to her but wondered if Willow would be able to let Harrison Chase (Josh Swickard) go.

Sonny quizzed Michael about whether he was sure he wanted to marry Willow. Michael assured him that he was completely sure, and that he and Willow were basing the marriage on respect and their love for Wiley Quartermaine Corinthos (Erik and Theo Olson).

Ultimately, Sonny accepted it, and he and Michael rejoined Carly and Willow at the bar. Sonny said he’d make some calls and get a marriage license drawn up.

At the Floating Rib, Sasha Gilmore (Sofia Mattsson) talked with Lucy Coe (Lynn Herring) while icing her nose. Lucy mentioned that she understood what it was like to be called the town tramp, which didn’t make Sasha feel any better.

Nelle walked in and said hi to Martin Grey (Michael E. Knight), then needled Sasha about her nose. Soon, Lucy got a call from Sonny to officiate Michael’s wedding, and Nelle heard that Michael was marrying Willow.

Nelle rushed over to tell Martin the news about Michael’s marriage, and Martin didn’t think the court would object to the marriage in any way. Upset, Nelle said that they needed a countermove. Martin quipped that he couldn’t conjure up a husband for Nelle, which gave Nelle an idea.

At the Q mansion, Ned was talking with Monica Quartermaine (Leslie Charleson) about Brook Lynn’s arrest when Brook Lynn and Julian arrived. Julian grumped about Leo’s call, and Ned informed him that Leo was playing him – Ned had simply told Leo earlier that he couldn’t have a pet snake, and Leo was upset. Julian went upstairs to talk to Leo.

Ned then proceeded to blast Brook Lynn for getting bailed out by Julian, but Brook Lynn fired back that she had nowhere else to turn. Soon, the doorbell rang, and it was Josslyn Jacks (Eden McCoy), who was all dressed up and ready for Michael and Willow’s wedding.

Josslyn told Ned and Brook Lynn that the wedding would be in the mansion tonight. Monica materialized, and Sonny, Carly, Willow, and Michael arrived.

Brook Lynn headed upstairs to find Willow something suitable to wear for the wedding, while Sonny thanked Monica for allowing the wedding to happen at the mansion.

Monica was miffed that Lucy would be officiating, but Sonny said that she was the only one available on such short notice. Sonny then had a word with Julian, who was returning down the stairs from seeing Leo. Julian said to give Michael and Willow his best wishes.

In the foyer, Michael thanked Willow again for agreeing to marry him, and he gave her Lila Quartermaine’s (Anna Lee) ring, which Willow accepted graciously. Michael gently put the ring on Willow’s finger, and it was a perfect fit. Meanwhile, Carly brought Wiley downstairs for the festivities.

Over at Pier 55, Chase was still brooding, and Sasha appeared to tell him that Willow and Michael were getting married tonight. Chase looked horrified, and he was even more horrified to hear from Sasha that Nelle had heard about the wedding.

Chase and Sasha decided that someone needed to warn the wedding party that Nelle might do something. Sasha called Carly and told her that Nelle knew about the wedding. Carly thanked Sasha for the call and said that nothing was going to stop the wedding.

Back at the Q mansion, the wedding began, and ultimately Lucy pronounced Michael and Willow husband and wife. Back at the pier, Sasha and Chase drank beer and commiserated. Meanwhile, back at Charlie’s Pub, Nelle pounded on the door. Julian yelled that they were closed, and when he finally opened the door, Nelle said that he’d was to hear what she had to say.

Nearby, Cyrus said that Jordan’s husband was very protective, and he thanked Jordan for exonerating him. Jordan told Cyrus to save the routine since no one else was around. Cyrus sweetly said that he looked forward to Jordan advocating on his behalf going forward and he wished her a good evening.

Jordan then returned to Portia, Trina, and Curtis, and Trina continued to blast her and Curtis for being just as bad as Cyrus. Portia told Trina to calm down, and that she needed to stay away from Cyrus. Trina said she’d promise, but only if Jordan and Curtis stayed away from her.

Later, Jordan and Curtis were talking alone when Cyrus ambled by. Curtis barked that visiting hours were over, and Cyrus said that’s why he was leaving. Cyrus said that TJ Ashford (Tajh Bellow) was working tonight, and that his interests were far reaching. Cyrus said that they shouldn’t underestimate that, and then he walked off.

There’s definitely a lot going on right now on General Hospital, so stay tuned! We’ll give you updates as GH news comes in. Stick with the ABC soap and remember that CDL is your go-to source for soap updates. We’ve got all your GH spoilers and news!