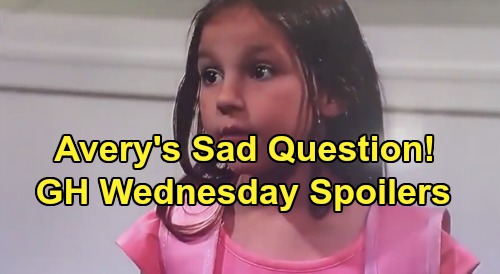 General Hospital (GH) spoilers for Wednesday, May 13, tease that Robert Scorpio (Tristan Rogers) will tell Laura Collins (Genie Francis) they should pick up where they left off. Laura will look like she wants to keep the mood lighthearted, but Robert will be in serious mode. This may have something to do with Holly Sutton (Emma Samms) and the suspicions surrounding her death.

Regardless, Laura will undoubtedly express concern for Robert, who hasn’t been doing very well lately. General Hospital spoilers say Laura will be a good friend to Robert in his time of need, so let’s hope she can help.

At the Metro Court, Olivia Quartermaine (Lisa LoCicero) will lash out at Lulu Spencer (Emme Rylan). Olivia will be exasperated as she demands to know what’s going on.

There’s a chance this is about Dante Falconeri (Dominic Zamprogna) or it could tie in with Dustin Phillips (Mark Lawson) since Olivia hasn’t exactly been thrilled about “Lustin.” No matter the topic, Olivia will clearly be pretty fed up with the situation. She’ll expect Lulu to provide some answers immediately.

Other General Hospital spoilers say Avery Corinthos (Ava and Grace Scarola) will ask her mom a heartbreaking question. Ava Jerome (Maura West) will look stunned when Avery asks, “Will I ever forget YOU?”

Perhaps Ava will bring up Kiki Jerome (Hayley Erin) and find that Avery’s memory is a bit fuzzy on her big sis. Ava might offer some reminders so Avery doesn’t forget about Kiki, which could lead to this response about Avery possibly forgetting her mom.

Whatever the case, Ava should be unsettled since she knows Carly Corinthos (Laura Wright) and Sonny Corinthos (Maurice Benard) would indeed push her out of the picture if they could. Never mind that Sonny’s whole family just got off lockdown! Ava deserves to spend more time with Avery, especially when Sonny’s got a threat like Cyrus Renault (Jeff Kober) lurking.

Next, Mac Scorpio (John J. York) will sense that Harrison Chase (Josh Swickard) is distracted at work. After Mac takes Chase aside, he’ll suggest it’s fine if Chase has something to handle. Mac will contend if there’s something Chase needs to go take care of, then he should do it.

Of course, Chase’s mind will certainly be on Willow Tait (Katelyn MacMullen) and Michael Corinthos (Chad Duell), who just got married at the Quartermaine mansion. Will Chase be tempted to go spill the fake affair beans? Chase will get confronted by Carly before the week’s over, so that’s a possibility to consider.

In the meantime, Michael will reassure Willow that their marriage efforts will be worth it. Willow will smile as Michael insists they’re going to get custody of Wiley Quartermaine-Corinthos (Erik and Theo Olson).

They’ll both be hopeful about beating Nelle Benson Archer (Chloe Lanier) in court, but little do they know Nelle’s cooking up a marriage plot of her own!

Based on the hints GH has offered, it’s clear that Nelle has Julian Jerome (William deVry) in mind as her new husband. General Hospital spoilers say Nelle will eventually drop a bomb in court, so that’ll likely involve her marital status. In the meantime, Carly will seek advice from someone, so we’ll see if she uses it or loses it!

Finally, Sonny will try talking to Mike Corbin (Max Gail) again at Turning Woods. Although Sonny didn’t have much luck last time, Sonny will give it another shot and suggest he needs to know what Mike wants.

It doesn’t look like Sonny will get much of a response, but he’ll be deeply concerned about Mike’s DNR and the possibility of letting him go.

“What if he doesn’t want to die?!” Sonny shouts in GH’s weekly preview video. It’s an emotional time for Sonny, who’ll continue to come to grips with his father’s looming death. We’ll make sure you’re in the loop on all the latest news and updates as they come in.

Will Sonny find a way to say goodbye to Mike? CDL will have plenty more General Hospital spoilers, updates and news posts to pass along, so don’t forget to stop by regularly.