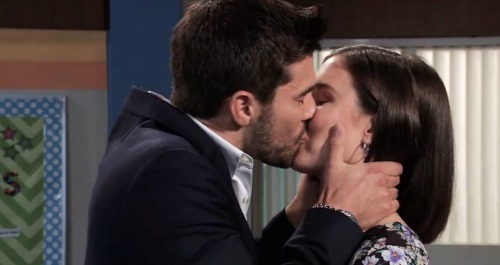 Sasha and Chase’s actions ensured a “Millow” marriage, but the scheme also brought their current misery.

Naturally, things have changed now that Nelle Benson Jerome (Chloe Lanier) is supposedly deceased. Sasha argued that Willow and Michael’s kiss pushed them past the point of no return. General Hospital spoilers say Sasha will remain adamant that Michael and Willow’s future is locked in.

However, Chase is struggling to keep quiet since he’s still madly in love with Willow. Chase’s struggles may get even worse thanks to Hamilton Finn (Michael Easton) and Anna Devane’s (Finola Hughes) looming wedding. It’s easy to imagine that having an emotional effect on Chase.

If this wedding actually pans out and we hear some vows, Chase may be reminded of what he’s lost – the chance at marriage, a family and a future with Willow. Chase just might resolve to do something about that despite Sasha’s disapproval.

Then again, Sasha seems to have an overdose coming up as part of her story. That’s the kind of thing that could lead to Chase’s full confession, too. Regardless, you can bet that Chase will make a grand gesture of some sort once everything’s out in the open.

There’s been plenty of talk about Willow’s reaction to the fake cheating exposure, but what about Chase’s reaction? It seems likely Chase is going to make a bold move in hopes of getting Willow back.

We can think of one shocking strategy that Chase might try – especially if GH works that “Fanna” marriage angle we mentioned.

Chase might decide all he wants is to spend the rest of his life with Willow. There are no doubts in Chase’s mind, so he may get down on one knee and offer Willow a new engagement ring.

Chase will obviously know that Willow’s married to Michael, but that’s kind of the point here. Chase can argue that Willow should be married to him instead!

Chase may encourage Willow to divorce Michael and follow her heart back to her ex. After a sincere apology, Chase can point out he only wanted to keep Wiley Quartermaine-Corinthos’ (Erik and Theo Olson) safe as well as make Willow happy.

Chase couldn’t let Wiley end up with Nelle – and he knew Wiley belonged in Willow’s life. The fake affair accomplished what it was supposed to, but now Nelle is dead. Chase may want Willow to see that they’re all free.

Of course, Chase may also argue that he can be an excellent stepdad. He’ll have no problem with Michael and Willow co-parenting, but they don’t have to be a couple to achieve that. Chase might run down the list of all the ways this can work if Willow will just let him make this right.

Unfortunately, it’s doubtful Willow would accept a marriage proposal under these circumstances. Willow seems too committed to Michael and the family they’re building.

Even so, that may not stop Chase from shooting his shot. It’s worth a try even if Chase crashes and burns.