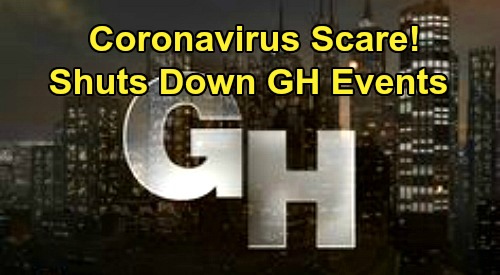 General Hospital (GH) spoilers today, March 12, involve real life events and the villain is covid-19, a.k.a. coronavirus. The concern of its spread is very real as it’s being reported that at least half of the American states now have confirmed cases. While we shouldn’t be paranoid for sure, it’s prudent to avoid large gatherings whenever possible and General Hospital Fantasy events typically involve hundreds of people in close quarters.

Linda Rohe of Coastal Entertainment announced the cancelations on Twitter saying that a decision was made by her company “along with the actors from General Hospital to postpone…” the gatherings. So the good news is that all seven actors are rescheduled in the same locations for the weekend of October 24th and 25th.

Going by the comments on Rohe’s Tweet, (see below) it appears that most GH fans understand and respect the date change. As Rohe notes, “everyone’s safety is of the utmost importance…” William Lipton (Cameron Webber) Retweeted Rohe’s event cancellation post and added “Please stay well everyone and I can’t wait to see you all in October!!”

Hopefully, everything will go as planned in October as the fan events give both soap viewers and soap actors a chance to meet and maybe even share a few laughs along with the pics and autographs. For sure something like this would be a lot more fun without the worry of health concerns, so rescheduling in October 2020 certainly sounds like the best idea for everyone involved.

Have you ever been to a General Hospital Fantasy event or other GH fan gathering? If so, what were the highlights for you? If not, would you consider going to one? Do you agree with the decision to postpone the two GH events due to coronavirus concerns?

In terms of the soap itself, It could be intriguing if the PTB (powers that be) choose to include a covid-19 storyline. After all Dr. Hamilton Finn (Michael Easton) has experience as Chief of Infectious Diseases at General Hospital. Keep checking CDL regularly as we get mote General Hospital news, updates and spoilers.

We have decided, along with the actors from General Hospital to postpone next week’s event in Arlington and Raleigh. We feel due to the current health warnings and concerns that everyone’s safety is of the utmost importance. We’re rescheduling for October 24 and 25. pic.twitter.com/6WWcfNBhvh

Please stay well everyone and I can’t wait to see you all in October!! 💙💙 https://t.co/0DCXiPp0VL