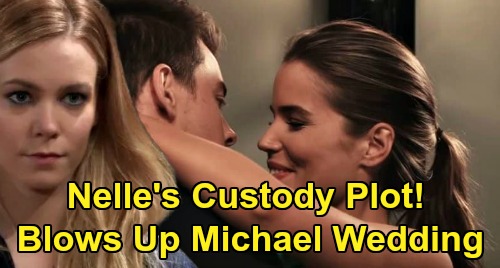 General Hospital (GH) spoilers tease that Michael Corinthos (Chad Duell) and Sasha Gilmore (Sofia Mattsson) will be on the same page. After Michael brought up the possibility of getting married, he ultimately suggested a marriage of convenience wasn’t ideal. If Michael marries Sasha, he wants it to be for the right reasons – not just because it could help him with the custody battle.

However, Michael had a nice chat with Harrison Chase (Josh Swickard) while Sasha had one with Willow Tait (Katelyn MacMullen). It led both Michael and Sasha the same conclusion: maybe they’re ready for marriage after all.

Michael admitted he isn’t afraid of taking that leap. As long as Sasha can love Wiley Quartermaine-Corinthos (Erik and Theo Olson), Michael won’t see any reason why this marriage won’t work. Sasha indeed loves Wiley, so it looks like they’ll make this engagement official on Friday, March 13.

Of course, it won’t be long until the news of this impending marriage spreads to the enemy! What will Nelle Benson Archer (Chloe Lanier) do once she gets updates?

General Hospital spoilers say Nelle will have some great motives to meddle, so let’s discuss those. For starters, there’s the obvious: Nelle won’t want Michael getting any kind of upper hand in this custody battle.

It makes sense for Nelle to form a plot and perhaps sabotage this wedding. She’ll have an extra motive to do so since she’s always been obsessed with Michael’s love life. Although Nelle doesn’t love Michael or want him back, she doesn’t want to see him happy with someone else either. The thought of Michael and Sasha playing house with HER son is bound to drive Nelle crazy.

GH fans know Nelle has big plans to raise Wiley – or William as she’s now considering calling him. That Nelle! Always keeping it classy. She likes to pretend she’s a woman of refined taste, but she’s the kind of gal who can get down in the mud.

That may be what Nelle has to do as Michael and Sasha’s nuptials approach. She’ll realize tying the knot would allow Michael to present another mother for his child – one that may be more desirable in the judge’s eyes.

Nelle can’t let that happen, which may be why she resorts to old manipulative tactics on March 24. A couple days later, General Hospital spoilers say a major shocker’s in store for Sasha.

Will Nelle manage to blow up Michael and Sasha’s wedding? What kind of sabotage could Nelle have in mind? As other GH news comes in, don’t miss CDL’s exciting updates. Stick with us for all the latest General Hospital spoilers.