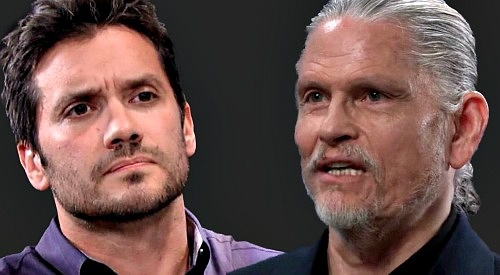 General Hospital (GH) spoilers tease that Dante Falconeri (Dominic Zamprogna) will almost certainly make a comeback down the road. Zamprogna recently told Soaps in Depth that he was willing to return on contract, so it seems like GH would be happy to welcome him home. With all the Dante mentions lately, it feels like General Hospital’s already been laying the groundwork for it.

The COVID-19 aka coronavirus crisis forced GH to suspend production, but the cast and crew will return to work eventually. Once that happens, General Hospital can hopefully get the ball rolling on this and bring Dante back to Port Charles. Dante may recover enough to return to his loved ones, but that doesn’t mean he’ll be truly well.

GH fans know Dante struggled to shake his programming and ultimately believed he was a danger to his family. Dante may not be a threat upon his return, but it’s safe to say he won’t be the same man he used to be.

It’s easy to imagine Dante remaining fragile and withdrawn for a while. Dante will need the people who care about him to step up and provide a sense of security.

Sonny Corinthos (Maurice Benard) would want to support his son, particularly after Mike Corbin (Max Gail) passes away. It’ll make it even more important to keep Dante around and help him through this.

Unfortunately, Cyrus Renault (Jeff Kober) could present a huge problem. This baddie has proven that he has no qualms about going after Sonny’s family members.

If Dante comes home, Cyrus may see him as weak spot for Sonny. Dante could be a distraction initially, but he could become a true target later. How horrifying would it be for Dante to get caught in a shootout? That could rev up Dante’s PTSD and spark concerns about him reverting to a dangerous mentality.

Dante’s life could even be on the line, so that’d be extra motivation for Sonny. The thought of losing Dante after all the work he’s done to get better wouldn’t go over well. If Cyrus dares to include Dante in his twisted web of danger, Sonny may decide it’s time to take deadly action – ready or not!

It’s worth mulling over how Dante might fit in all the Cyrus mayhem since his return seems to be brewing. As other GH updates emerge, we’ll fill you in on all the latest news.