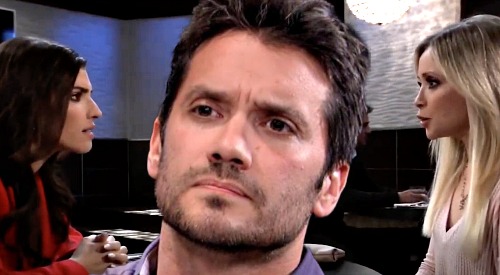 General Hospital (GH) spoilers reveal that there’d be a lot of great material to play around with if Dante Falconeri (Dominic Zamprogna) came home. Fortunately, Zamprogna’s on board with the idea according to a recent interview with Soaps In Depth. Since Zamprogna’s willing to return on contract, GH will surely make Dante’s comeback happen at some point.

With that in mind, we should consider what the future might hold for Dante. Plenty of “Lante” fans are rooting for a reunion, but it may not be that simple. Dante pushed Lulu Spencer (Emme Rylan) into a divorce, so she ultimately accepted that and moved on. Now Lulu’s in a relationship with Dustin Phillips (Mark Lawson), so that could complicate things a bit.

However, the truth is Lulu’s feelings for Dustin can’t compete with the deep love she has for Dante. Lulu must realize that, but there could be other reasons for her to push Dante away. General Hospital fans know Lulu’s dealt with crushing pain. A lot of it’s been due to Dante keeping Lulu and the rest of his loved ones as distance.

It’s easy to imagine Lulu keeping her walls up to avoid more heartache. Then again, maybe Dante could be the one causing hurdles again. Even after Dante inevitably recovers, he may still feel like he’s not the same man. Dante may no longer be a threat to his family, but that doesn’t mean he’ll be back to normal.

There could be emotional wounds that’ll never quite heal due to Dante’s programming. Dante sank to a dark place that’ll be hard to rise out of. If Dante comes home and rejects Lulu to protect her, that could set Dante up to be paired with someone else. Brook Lynn Quartermaine (Amanda Setton) seems like a good choice due to the love triangle potential.

Thanks to Brook Lynn’s complicated history with Dante and her ongoing feud with Lulu, this sounds like soapy gold. Just think of rejected Lulu watching Brook Lynn pounce! Lulu would feel like Brook Lynn was preying on Dante when he was most vulnerable. Maybe Brook Lynn could spark some jealousy and convince Lulu to fight for her man.

If Brook Lynn “steals” Dante upon his return, that’d lead to some fun possibilities. As for Dustin, he might realize he’s never going to measure up in Lulu’s eyes. Dustin may not be down for living in Dante’s shadow, so that could lead to a breakup and give Lulu the freedom to fight.

Nothing’s been confirmed about a Dante return stint, but it’s bound to happen since Dominic Zamprogna’s interested. If it all works out, Brook Lynn and Lulu could have a major Dante war! As other GH news emerges, we’ll deliver more updates.