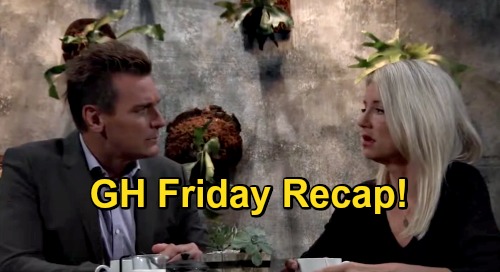 Carly told Avery that the necklace was still being fixed and she didn’t know when it would be ready.

Carly was shocked, and she was even more shocked to learn that Julian knew for months that Wiley Corinthos (Erik and Theo Olson) was Michael Corinthos’ (Chad Duell) son.

Carly then disclosed to Sonny and Jason that Nelle Benson Jerome (Chloe Lanier) was Nina Reeves’ (Cynthia Watros) daughter, and that Jasper “Jax” Jacks (Ingo Rademacher) knows, too. Jason and Sonny worried that Jax would say something to Nina about it, but Carly thought that Jax would keep the secret forever.

At the Corinthos house, Josslyn Jacks (Eden McCoy) and Jax were in the kitchen when Trina Robinson (Sydney Mikayla) came in and asked for some time alone with Josslyn. Trina shared that her father might be alive per Cyrus.

Josslyn thought that Cyrus could be playing Trina, and Trina knew it, but she still said that she wanted to get to the bottom of this. Josslyn and Trina pinky swore to keep this information from Sonny and Carly, and Trina said that she knew where to start looking.

At the Quartermaine mansion, Michael and Willow Corinthos (Katelyn MacMullen) talked about facing the truth and their feelings for each other.

Michael and Willow both admitted that they had feelings for each other, but that they needed to figure out how they felt about Harrison Chase (Josh Swickard) and Sasha Gilmore (Sofia Mattsson) before they make any decisions about their relationship.

At the hospital, Britt Westbourne (Kelly Thiebaud) was on the phone trying to track down Julian when Chase approached wanting to see Sasha’s toxicology report. Britt asked if Chase had a warrant, and Chase persisted, saying that he needed to see the report.

In Sasha’s room, Nina checked on Sasha, who was still in denial about overdosing and insisted that she “just” had a heart attack. After some tender moments with Sasha, Nina took off as Chase was coming in.

Chase told Sasha that the cocaine she took was laced with dextroamphetamine and that he wanted to know where she got the drugs. Sasha avoided the question, and eventually Chase admitted that he told Willow the truth about their fake affair.

Sasha was upset at first about this, but then she realized that Michael had stayed in her room with her because he knew the truth. Sasha wondered if she and Michael still had a chance, and then Chase told her that Michael and Willow’s marriage was real, and they were sleeping together.

Sasha said that she always knew that they wouldn’t be able to come back from their big lie. Chase got a message from Willow and took off, and then Michael showed up.

Near the nurses’ hub, Britt grumped at Lucas Jones (Matt Trudeau) about how he barely spoke to Brad Cooper (Parry Shen).

Lucas wasn’t in the mood to talk about this, and Britt noted that when Brad pled guilty to Wiley’s kidnapping and switching the babies, that he assumed all the blame even though he had help from someone else. Lucas was confused as Britt said that Brad only wanted him to keep the family he had left.

At Wyndemere, Ava Jerome Cassadine (Maura West) got comfort from Nikolas Cassadine (Marcus Coloma) as she told him the whole story about how she turned on Julian and Julian jumped over the turret.

Nikolas wondered what made Ava want to kill Julian, and she said that she had to choose Julian or Nikolas, and she chose Nikolas. Ava said that she wanted to tell Nikolas everything, but that it was bad.

Nikolas urged Ava to tell him, and Ava said that Julian had planted the bomb at The Floating Rib at Cyrus’ direction.

Nikolas was upset and ranted about Julian, and Ava explained that as soon as she found out that Lulu Spencer (Emme Rylan) was injured in the explosion, she had a moment of clarity and chose Nikolas over Julian to make amends for what Julian did.

Ava said that Nikolas was all that she had left. “Can you accept that – accept us?” Ava said. “Would it be enough for you?” Nikolas said that it would be, and that he was ready to move forward together and build a future together. “I love you Ava, I do,” Nikolas said before kissing Ava.

At the coffee house, Jax and Nina talked about Sasha’s condition and about the big lie that Sasha told about being Nina’s daughter. Jax wondered if Nina forgave Valentin Cassadine (James Patrick Stuart), too, and she said that she didn’t know but that she understood it a little more now.

Nina said that holding onto lies was hurtful, and that the truth was always best.

Jax nearly told Nina the truth about Nelle, but then Nina started waxing about how her daughter was an adult now, and that she hoped that the family who adopted her gave her confidence to reach her full potential.

“I hope she’s had a good life, even if I never get to be a part of it,” Nina said. Jax then said that maybe Nina’s intuition was right and that maybe it was time to stop looking.

That was a great episode of General Hospital – what a great way to round out the week! We’ll give you updates throughout the weekend as more GH news comes in. Stick with the ABC soap and don’t forget to check CDL regularly for the latest General Hospital spoilers, daily episode recaps, and news.