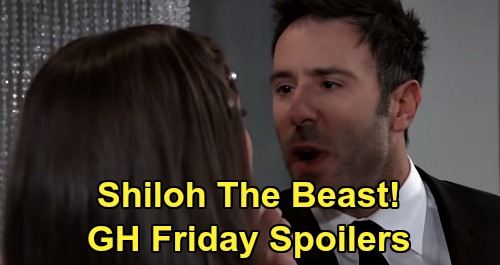 General Hospital (GH) spoilers for Friday, June 12, tease that the ABC soap will wrap up their Nurses Ball theme with an episode that first aired on May 22, 2019. GH will kick off a new theme featuring Sonny Corinthos (Maurice Benard) and Carly Corinthos (Laura Wright) next week, but there’s still one more Nurses Ball encore to enjoy. Here’s what to expect in this General Hospital classic.

Backstage, Ryan Chamberlain (Jon Lindstrom) is impressed by Ava Jerome’s (Maura West) performance. He feels like Ava was singing right to him. Kevin Collins (Jon Lindstrom) is still unconscious on the floor as Ryan makes his way around him.

Meanwhile, Nina Reeves (Michelle Stafford) rants to Michael Corinthos (Chad Duell) about Willow Tait (Katelyn MacMullen) and that mouth of hers. Michael points out that Nina’s the reason Willow lost her job, but Nina disagrees. She suggests that it was hypocritical for Willow to blame Nina and Valentin Cassadine’s (James Patrick Stuart) parenting skills when Willow gave her own baby up.

Meanwhile, Shiloh snatches Willow by the arm and accuses her of running off with their unborn baby. Thanks to what Shiloh overheard, he thinks Willow was pregnant when she left DOD and demands answers. Willow finally admits it’s true and makes it clear that Shiloh won’t have anything to do with his child. Shiloh slams his fist into the wall in frustration.

After Shiloh grabs Willow by the face and pushes for info on where their child is, Michael appears and takes action. He shoves Shiloh to the floor and insists that to get to Willow, Shiloh will have to go through Michael. Shiloh rises to his feet as he’s warned to leave Port Charles, but Shiloh notes that he’s a father and will see Willow soon. Once Willow’s alone with Michael, she breaks down in his arms.

As for Harrison Chase (Josh Swickard), he fills Ava, Mac Scorpio (Tristan Rogers) and Felicia Scorpio (Kristina Wagner) in on what happened with Curtis Ashford (Donnell Turner) and Laura Collins (Genie Francis) in Canada. Chase notes that Ryan got a head start and could be anywhere, but Ava thinks they all know where Ryan’s going.

Ava assures Chase that she has somewhere safe to go after the Nurses Ball. She eventually steps aside and calls about the Cedar Mountain property. Ava’s willing to pay the caretaker generously to open up the house ASAP and is on her way over.

Backstage, Sonny finds Josslyn fretting about not being able to go on. Joss fears she’s causing disappointment, but Sonny shuts down that idea. He thinks Oscar would just want Josslyn to be happy and gives Joss a pep talk about how Oscar’s always with her.

Later, Jasper “Jax” Jacks (Ingo Rademacher) guides Josslyn as well and insists he’ll be in her corner no matter what. Josslyn decides to sing the song she wrote with Oscar, who appears in the distance and smiles at her. Oscar vanishes after the song, but Joss tells Sonny that he was right about Oscar being there for her.

Scott Baldwin (Kin Shriner) tries to talk to Kevin in another area, but Scott learns it’s Ryan when his hand comes off. Ryan knocks Scott out cold and takes off before anyone can catch him. Back with Shiloh, he returns to his table and seethes about someone betraying him in the worst way possible. Shiloh tells Sam that someone had his child – and he fully intends to find that child.

Sam reminds Shiloh of the techniques he teaches to calm his followers. Shiloh shows his appreciation for Sam and pushes her to complete her initiation tonight, so Sam agrees.

After witnessing Shiloh and Willow’s strange behavior, Lucas tells Brad that he’s had a terrible thought. Despite Brad’s efforts to steer the conversation in another direction, Lucas assumes Shiloh and Willow are Wiley Cooper-Jones’ (Erik and Theo Olson) birth parents.

Backstage again, Epiphany Johnson (Sonya Eddy) thinks Scott’s had too much to drink, but he insists Ryan clubbed him. Once the Nurses Ball is over and the ballroom’s mostly cleared out, Kevin is found dangling from the ceiling in a straitjacket. Lucy Coe (Lynn Herring), Mac, Felicia, Willow and Michael all look aghast.

At the house on the Cedar Mountain property, Ava sits out a metal case and tells Ryan to come and get her. She eventually makes a drink and unlocks the door before sauntering off. Moments later, Ryan can be seen lurking outside.