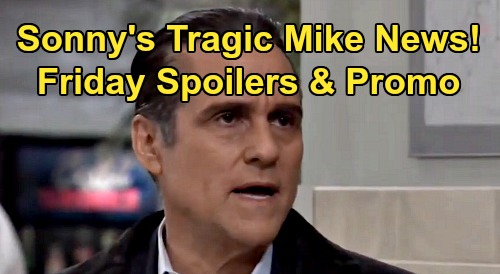 General Hospital (GH) spoilers for Friday, March 27, tease that Britt Westbourne (Kelly Thiebaud) will have a run-in with Anna Devane (Finola Hughes). Britt will point out that arresting her mother has become quite the habit for Anna, but she probably won’t complain too much. After all, Britt’s siding with Peter August (Wes Ramsey) and truly believes Liesl Obrecht (Kathleen Gati) is capable of anything.

Hamilton Finn (Michael Easton) will be by Anna’s side during this initially tense conversation. In the end, they may all agree that Liesl’s right where she belongs: behind bars. Of course, it’s Peter who actually needs to be there! Let’s hope Robert Scorpio (Tristan Rogers) can bring Peter down soon with Liesl’s help.

In the meantime, Josslyn Jacks (Eden McCoy) will drop some hints about Cameron Webber (William Lipton) during her chat with Trina Robinson (Sydney Mikayla). It looks like Trina will decide she’s tired of beating around the bush. Trina will insist that if Joss wants to talk about Cam, they should just do it.

Josslyn picked up on the weird vibe between Cameron and Trina after their secret kiss outside. When Joss wonders what’s going on, Trina may choose to admit what went down. She’s in a fed-up headspace where she just wants to put stuff out there and let the chips fall where they may.

Trina might argue the kiss meant nothing, but Josslyn probably won’t be so sure if she gets updates.

Other General Hospital spoilers say Ava Jerome (Maura West) will spend more time bonding with Franco Baldwin (Roger Howarth). Ava will ask where Franco wants her, so she’ll undoubtedly pose for her portrait again and await some amazing results. Franco certainly appreciates the faith Ava has in him as an artist.

Nikolas Cassadine (Marcus Coloma) is hoping to exploit Franco and Ava’s connection, so we’ll see if that plan ever pans out. Speaking of plans, Carly Corinthos (Laura Wright) will make a fast one on Friday. As soon as Carly’s brought up to speed on the latest Nelle Benson Archer (Chloe Lanier) drama, she’ll intend to deal with this now.

Michael Corinthos’ (Chad Duell) mom shouldn’t have to fight his battles for him, but she’s always going been a meddler! If Michael couldn’t get through to Nelle, what makes Carly think she can browbeat her nemesis into it? Carly’s probably only going to make Nelle dig her heels in even more.

Nelle was adamant about skipping Wiley Quartermaine-Corinthos’ (Erik and Theo Olson) surgery, and it seems she’ll remain against it on Friday. General Hospital spoilers say Nelle will reiterate that she’s not going to let anyone cut open her son.

This ordeal has certainly provided extra motivation for Michael to step up and protect Wiley. Willow Tait (Katelyn MacMullen) pointed out that Michael has to do whatever it takes to get full custody. GH appears to be inching Willow and Michael toward the altar, so there’s much more drama ahead.

Other General Hospital spoilers say Alexis Davis (Nancy Lee Grahn) will sink to a darker and darker place. Sam McCall (Kelly Monaco) said some pretty cruel things in the heat of the moment.

During her confrontation with Alexis, Sam argued that her mom never fights for anything anymore. Alexis was heartbroken when Sam snapped that she used to admire Alexis, but now she just feels sorry for her.

Although Sam quickly apologized, the damage was done. As Alexis battled thoughts about refusing to fight for Neil Byrne (Joe Flanigan), she downed the shot the bartender offered.

When he offers another on Friday, Alexis will take him up on it. She’s clearly falling off the wagon big time, so this will lead to some concerns from those closest to her soon enough.

Back at GH, Sonny Corinthos (Maurice Benard) will wonder what happened. General Hospital fans know Sonny just got a call from Turning Woods, which was obviously about Mike Corbin (Max Gail). Mike will have to be hospitalized following a serious fall, so Sonny will get the latest news on his condition.

Sadly, this is the beginning of the end for Sonny’s dad. Mike’s decline will continue as a much faster rate due to this crisis, so Sonny will have to brace for a difficult loss. Be sure to stop by CDL regularly for more sizzling General Hospital spoilers, updates and news posts.