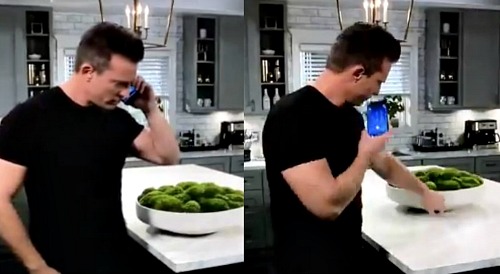 General Hospital (GH) spoilers has some fun news to pass along about a very important part of the GH landscape. As you probably know by now, the bowl of moss that lives in the Corinthos kitchen has taken on a persona of its own in GH lore. The GH moss is, of course, present for every kitchen scene and gets quite a bit of attention among GH fans.

Well, recently on GH, Jason Morgan (Steve Burton) had a humorous interaction with the moss. In a kitchen scene where Jason was on the phone with Sam McCall (Kelly Monaco), he turned to and noticed the moss, which was out of its usual place in the center of the countertop in the Corinthos kitchen.

The moss had seemingly migrated over to the edge of the counter where Jason was standing, and Jason pushed the moss bowl back to the center of the counter in disgust, as if the moss were intruding on his conversation with Sam. It was a cute scene, and soon Sonny Corinthos (Maurice Benard) entered the kitchen and the scene continued.

This was an important moment for fans of the GH moss, and social media was abuzz with comments on the funny scene. On Twitter, one fan commented: “The attitude he gave the moss tho, totally StevieB.” And another person said: “…hahaha when he pushes that moss bowl and the look on his face…”

There’s even a fan account for the GH moss on Twitter, which posted a statement shortly after the scene aired on the show. The account is @TheMossBoss2 and it posted the following, along with a video of the scene: “Hello…@1SteveBurton please clear up the fact that you were just moving me closer to the sun. Nothing mean happening here. There is no hit on the Moss Boss!”

To that, one of @TheMossBoss2’s followers replied: “If there was a hit on you, he’d have pushed you harder and you’d have landed on the floor at the opposite end of the counter. I think he’s jealous. You’re too close to his Sonny.”

At any rate, it was great to see the GH moss getting some action on the show. That moss hears everything that goes on in the Corinthos kitchen and could probably tell some great stories! We’ll see who the moss interacts with next – GH viewers will have to keep their eyes open for more moss interactions going forward.

What did you think of Jason’s interaction with the GH moss? Keep checking back with us here at CDL for the latest General Hospital news. We’ll keep you up to date on all the latest spoilers, too, and don’t miss an episode of the ABC soap!

Hello.. @1SteveBurton please clear up the fact that you were just moving me closer to the sun. Nothing mean happening here. There is no hit on the Moss Boss! https://t.co/FUVbMjqcUF

“I’ll be at the Qs at 3 to pick up Danny; yes and I’ll make sure he does his homework- I love you too”

the attitude he gave the moss tho, totally StevieB 😂😂#JaSam #GH pic.twitter.com/onIhZsdAug