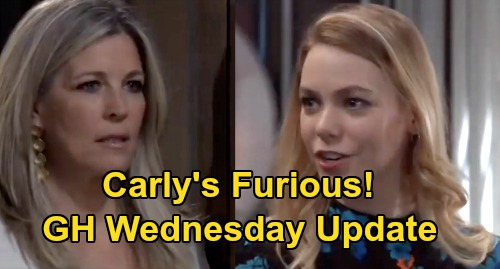 General Hospital (GH) spoilers update for Wednesday, March 25, teases that Carly Corinthos (Laura Wright) will fume when she shows up at Crimson. Nelle will notice Carly arriving and happily fill her in on the job she just scored. The news will leave Carly enraged, but that’s only because she doesn’t know Nina Reeves’ (Cynthia Watros) grand plan.

Nina gave Nelle a position with the intention of watching her closely and trying to help Michael Corinthos (Chad Duell) keep custody. Nelle wanted the stability of this job for the custody battle, so Nina’s just using her own manipulation against her.

At GH, Wiley Quartermaine-Corinthos (Erik and Theo Olson) will get the urgent care he needs. Michael insisted on rushing Wiley to the hospital after a crisis upstairs, so GH fans will get updates on Wednesday.

Monica Quartemaine (Leslie Charleson) will explain that Wiley needs surgery. That could involve the heart condition Wiley inherited, but it seems more likely Wiley got injured in a little mishap.

Nelle could easily argue that Michael doesn’t keep a close enough eye on their son. This is something Nelle could bring up in court and use against Michael, so that could be a good way to go for the story.

Other General Hospital spoilers say Trina Robinson (Sydney Mikayla) will get in trouble at the gallery. Portia Robinson (Brook Kerr) will show up and scold Trina for showing up there.

After Portia pushes Trina to head home, Ava Jerome (Maura West) will face this fierce mom’s wrath again. It’s hard to understand why Portia has such a grudge since Ava’s been nothing but helpful to Trina.

Meanwhile, Sam McCall (Kelly Monaco) will sit down for another chat with Molly Lansing-Davis (Haley Pullos). Molly will complain about Jordan Ashford (Briana Nicole Henry) leaving her out of the loop on things. GH viewers know Molly’s been worried about TJ Ashford (Tajh Bellow), so she won’t get why Jordan wouldn’t tell her about being in touch with him.

The truth is Jordan hasn’t been communicating with TJ. She’s been receiving pictures of poor TJ in bad shape as Cyrus Renault’s (Jeff Kober) hostage. Of course, the fewer people who know, the better! Jordan has been trying to keep this secret contained to protect TJ, so Molly will remain outside the circle for now.

Over with Sonny Corinthos (Maurice Benard), he’ll push for a slightly different tactic. Jason Morgan (Steve Burton) and Curtis Ashford (Donnell Turner) will think Sonny’s got the right idea. Jordan knows Cyrus won’t rest until he’s out of prison and exonerated, so she’s planning to confess that she framed him.

However, it looks like Sonny will push Jordan to let her dead colleagues take the blame. Jordan will be disgusted at the thought of throwing her team under the bus, but it could keep her out of the slammer.

General Hospital spoilers say Jason will make an appeal to Jordan on Wednesday. With Sonny and Curtis backing him up, Jason will hope to get Jordan to side with them on this.

Wednesday’s preview video also shows Sonny suggesting that they can’t retaliate. Naturally, they can’t just let Cyrus run amok either. It sounds like Sonny will have to either wait until the time is right or perhaps get pushed to his limit! Be sure to visit CDL frequently for exciting General Hospital spoilers, updates and news.