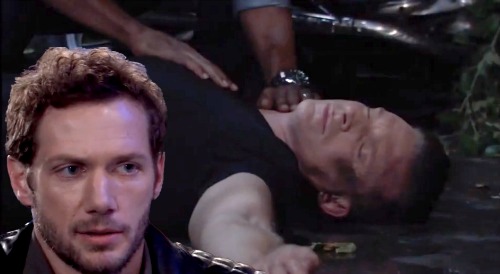 General Hospital (GH) spoilers tease that Jason Morgan’s (Steve Burton) motorcycle accident will spark questions. Although everyone will just be concerned about Jason at first, there’ll be suspicions later. Jason typically has no problem driving his bike.

It’s tough to believe that “Stone Cold” simply took a turn too hard and lost control. It seems more likely that Jason’s crash was no accident at all!

When Jason showed up at the garage, Brando Corbin (Johnny Wactor) brought up his earlier visitors. Brando mentioned Lulu Spencer (Emme Rylan) and Cyrus Renault (Jeff Kober) facing off, but he stayed quiet about whatever Cyrus privately discussed with him.

GH fans weren’t privy to that conversation, so it’s troubling that Brando never revealed the details to Jason.

If Brando’s supposed to be a good guy, why is he keeping secrets? Brando was also awfully eager to install Jason’s new motorcycle part free of charge. It’s possible this is all a case of misdirection, but it’s equally possible that Brando’s working for Cyrus and was ordered to mess with Jason’s bike.

After all, Cyrus has already been plotting to take Jason out. This may have been how Cyrus chose to do it. Regardless of whether Brando’s innocent or guilty, we can’t ignore the evidence.

Sonny Corinthos (Maurice Benard) won’t be able to ignore it either – especially if he learns the bike part wasn’t installed correctly or was perhaps faulty.

Sam McCall (Lindsay Hartley) will also battle suspicions about Brando in the aftermath of this crash. Part of that may be because Sam’s looking for someone to blame or at least needs a distraction.

Nevertheless, Sam’s instincts might be spot-on. Jason had a bad feeling about Brando from the get-go, so Sam may think he was right all along.

There’s still a chance General Hospital will clear Brando’s name eventually, but it’d be a great twist to make him an attempted murderer. Even if Brando was blackmailed into doing this, it’s a big deal if he actually tried to kill Jason – Sonny’s closest friend and right-hand man.

This is all happening as Sonny’s on the verge of losing Mike Corbin (Max Gail), so that’ll be doubly hard.

Mike will be dead soon, Jason should be in a coma and Sonny could be pushed to his breaking point! In this emotional state, there’s no predicting what Sonny might do next.

Sonny just might pick up a gun and threaten to kill Brando. Brando may be family, but Sonny would murder him in a heartbeat if he found out Brando was to blame for Jason’s crash.

Sonny’s sure to want revenge over Jason’s ordeal, especially when he’s faced with the possibility of losing two people so close to him. There’s no doubt that Mike’s demise will leave Sonny fragile and out for blood. Since Sonny may believe Jason’s going to die, he might want seemingly guilty Brando to die, too.

Will Brando have to plead for his life in an upcoming showdown? Will Brando confess and beg for mercy or insist Sonny’s got it all wrong?

As other GH news and updates emerge, we’ll keep you posted. General Hospital fans won’t want to miss the shockers ahead. CDL will have lots of other scorching General Hospital spoilers, updates and news, so drop by often for more exciting posts!