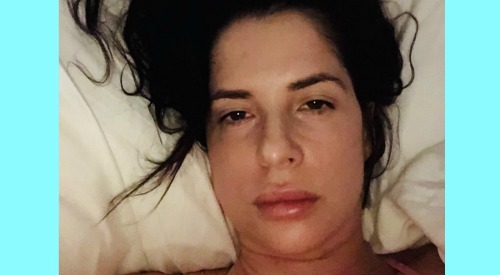 General Hospital (GH) spoilers has some news to pass on about a popular GH star. Kelly Monaco, who portrays Sam McCall on the ABC soap, recently shared her woes over the COVID-19 situation that’s gripping the world. Kelly posted a “keep it real” selfie from bed as she was waking up on Saturday morning and aptly captured how many of us are feeling right about now.

Kelly’s caption reads: “Gooood morning quarantine day 7,160. Kelly: go back to bed. Me: ok. (People: I’m not sick. Just tired). #keepingitreal.” Of course, many of us can relate with Kelly’s sentiment, and to the feeling of waking up just to realize we’re stuck in the house for the rest of the day…again.

Kelly has received a lot of likes and replies on her post, including many from her fellow GH co-stars. Elizabeth Hendrickson (ex-Margaux Dawson, GH) replied by saying: “Who knew it was so exhausting doing nothing?” And Rebecca Budig (ex-Hayden Barnes, GH) replied: “Hot. Even tired.”

Michelle Stafford (ex-Nina Reeves, GH) responded similarly, saying: “And you are super HOT!!!!” Kelly then replied back, saying: “Ha. I love you,” prompting Michelle to say: “I love you SOOOO!!”

Kelly got quite a few comments from fans as well, who all wished her well. One follower replied: “Right there with you, sistah!” And another commented: “I don’t even know what day it is. Every day is Groundhog Day.” Finally, a fan said: “GM! You look gorgeous as ever! Stay safe love.”

Of course, we and all of Kelly’s fans are hoping that this COVID-19 crisis will be over soon so that Kelly and the rest of the cast and crew at General Hospital can get back to work and produce more shows. Kelly’s character, Sam, has a lot of drama going on right now and we want to see it continue!

Sam recently had a major fail when she and Damian Spinelli (Bradford Anderson) attempted to get the dirt on her parole officer, Delores Maloney (Andi Chapman). Not only did Delores end up with the upper hand against Sam, but the whole situation resulted in a major blowup between Sam and her mom Alexis Davis (Nancy Lee Grahn) that let Alexis to take a drink.

Sam hasn’t yet found out about Alexis’ slip, but chances are she’ll feel terrible about the whole thing when she does. That should lead to some serious mother/daughter moments on the show between Sam and Alexis. But will Sam really do what Jason Morgan (Steve Burton) suggests and stay away from him for another year-and-a-half while she finished out her parole?

We doubt it, and time will tell just what Sam’s next steps will be. At any rate, we’re hoping that production on the shows will be back on in the near future! Keep on watching the ABC soap and remember to consult CDL often for the latest General Hospital recaps, news, and spoilers.