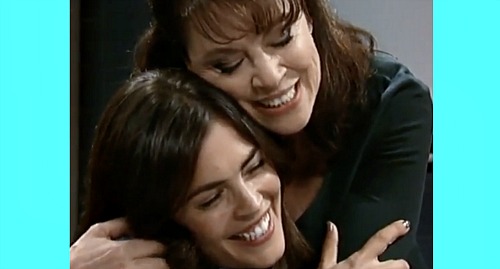 General Hospital (GH) spoilers tease that an exciting casting comeback is in the works. According to Soap Opera Digest, Kelly Thiebaud is on set and filming new GH scenes for a Britt Westbourne return. This is certainly fantastic news for Britt fans, who always enjoy when this fun character pops in again.

It’s a short-term visit, but General Hospital viewers will take what they can get! There’s no word yet on what will bring Britt back in the picture, but there’s a good chance it’ll involve her mom, Liesl Obrecht (Kathleen Gati). Liesl always seems to land in some kind of trouble, even if she creates most of her messes!

However, it could be Peter August (Wes Ramsey) that creates Obrecht’s latest one. General Hospital spoilers say just when Liesl seems poised for a fresh start, her past will catch up with her. She’ll face a new battle, so Peter may use Liesl as his scapegoat and consider it karma for the way she once targeted him. That’s the kind of thing that could bring Britt, who was last seen in 2017, into the story again.

Of course, we can’t rule out Britt being involved in Nina Reeves’ (Cynthia Watros) long-lost child storyline. Many GH fans still think it’s odd that Britt and Sasha Gilmore (Sofia Mattsson) look a lot alike. Is there a deeper reason behind the casting choice and the family resemblance?

Some viewers out there wish General Hospital would just make Sasha the real daughter of Nina and be done with it. This storyline has gone on long enough, so it’d be a neat and tidy twist to wrap things up. Regardless, it’ll be nice to see Britt again no matter what stories she plays a role in. We should note that Brad Cooper (Parry Shen) could use a friend right now, too!

On Twitter, Thiebaud acknowledged her comeback and left her fans overjoyed. “I guess the secrets out!” Thiebaud tweeted. She naturally got plenty of replies from viewers eager to see more Britt. “SO excited to see Britt back on GH,” one fan said. “Your Mutter awaits your return!” joked another.

Nicolas Bechtel (Spencer Cassadine) even chimed in with some smiley face emojis with floating hearts. Let’s hope Thiebaud’s feeling all the love and excitement. There’ll undoubtedly be some story updates as Britt’s onscreen return gets closer.

Are you glad Kelly Thiebaud will reprise her role as Britt Westbourne? As other news emerges, don’t forget to stop by CDL often. We’ll pass along more General Hospital spoilers, updates and details.