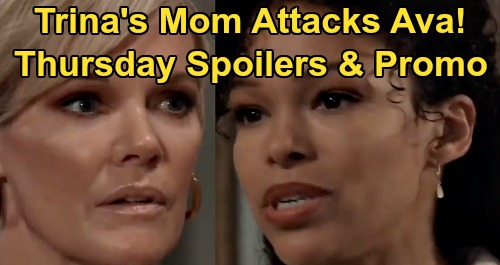 General Hospital (GH) spoilers for Thursday, March 5, tease that Dr. Portia Robinson (Brook Kerr) will make her debut. She’ll have some scenes at GH, but she’ll also head over to Ava Jerome’s (Maura West) gallery for a heated confrontation. It looks like Ava will overstep somehow when it comes to Portia’s daughter, Trina Robinson (Sydney Mikayla).

Perhaps Trina will want to throw herself into work at the gallery to avoid dealing with her grief. GH fans know Trina recently lost her father, Marcus Taggert (Real Andrews). Portia will want to watch out for Trina and make sure she’s taken care of. She won’t think that’s Ava’s job, so she’ll confront her and make it crystal clear who Trina’s mother is.

Other General Hospital spoilers say Molly Lansing-Davis (Haley Pullos) will grow concerned about TJ Ashford (Tajh Bellow). He left in a huff after Molly rejected his marriage proposal, so she gets that he needed time and space.

However, it seems TJ will continue to shut Molly out and leave her with growing fears. Molly will tell Sam McCall (Kelly Monaco) that it just isn’t like TJ to do this.

There’s a good chance TJ’s been kidnapped by Cyrus Renault’s (Jeff Kober) goons, which Jordan Ashford (Briana Nicole Henry) should find out soon enough. Until then, Sonny Corinthos (Maurice Benard) and Jason Morgan (Steve Burton) will want details. They know Cyrus has something on Jordan, so they’ll push Curtis Ashford (Donnell Turner) to reveal the dirt.

As for Jordan, she’ll unleash her wrath in Thursday’s episode. General Hospital’s latest preview video shows Jordan shouting, “Wake the hell up!” She should be even angrier when she realizes TJ’s missing and could be injured thanks to Cyrus.

It seems likely this will lead to a life-threatening crisis for TJ It’s certainly easy to imagine Molly changing her mind about marriage after nearly losing her love.

Whatever the case, some hot drama’s brewing in the Cyrus storyline and in the baby swap saga. Nelle Benson (Chloe Lanier) has wiggled out of trouble for now with a little help from Valentin Cassadine (James Patrick Stuart).

The charges could be refiled if new evidence surfaces, but Nelle’s unbothered by that possibility. She’s already preparing for a custody battle over Wiley Quartermaine-Corinthos (Erik and Theo Olson).

Since Nelle announced that she intends to seek full custody, Carly Corinthos (Laura Wright) will offer a warning on Thursday. If Nelle wants to go to war with Carly and her family, Carly will contend that they’re ready.

Carly will be brimming with confidence, but Nelle isn’t a threat that should be underestimated! Even if Nelle’s victories tend to be short-lived, they can cause plenty of damage.

Across town, Anna Devane (Finola Hughes) will catch up with Peter August (Wes Ramsey). She’ll tell Peter about a company called Luna Industrial Enterprise and wonder if he’s heard of it.

This could lead to another tight spot for Peter to climb out of. He always seems to land in those, so he’ll soon take steps to pin his crimes on someone else. Peter will just want to end his nightmare once and for all.

Next, General Hospital spoilers, news and updates say Liesl Obrecht (Kathleen Gati) will lash out at Damian Spinelli (Bradford Anderson). She’ll ask what he thinks he’s doing, but the answer is probably digging!

Spineill’s always on the hunt for proof, but will the only proof he finds point at Obrecht? Liesl is becoming a likely scapegoat contender, so stay tuned for more Peter chaos.

It sounds like the excitement’s revving up in Port Charles. As other updates and news emerge, stick with CDL for hot General Hospital spoilers and scoops.