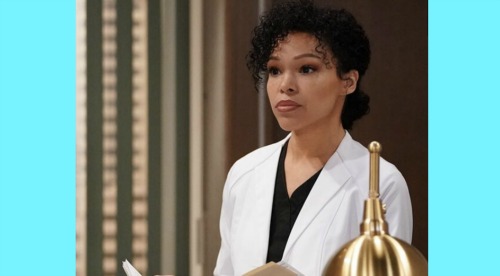 General Hospital (GH) spoilers tease that a new actress is joining the cast – and she may look familiar to some soap fans out there. According to EW, Brook Kerr will is headed to General Hospital as a doctor at GH. Her first airdate is coming up on March 5, and she’ll undoubtedly have some interesting connections on canvas.

Before we get to those, let’s talk about where you might’ve seen Kerr before. Fans of NBC’s Passions will remember Kerr from her role as Whitney Russell Harris-Crane. Kerr played Whitney from 1999-2007, so she brings plenty of daytime drama experience to the table.

Now let’s dive a little deeper and talk about who Kerr’s really playing. She’s more than just a random doc who’ll be treating patients. On Instagram, Kerr revealed that her character’s name is Dr. Portia Robinson, so that’s a helpful hint. GH watchers will recall another character with that same last name: Trina Robinson (Sydney Mikayla).

Trina has become a fan favorite thanks to her quick wit and tendency to tell it like it is. She feels like the heart of the teen scene now – the glue that keeps them all together. It’s nice that General Hospital is giving Trina some family members and expanding her presence in town.

Some exciting stories should be told once Portia’s on the scene and fearful about how Taggert’s drama is affecting their daughter. Trina and Cameron Webber (William Lipton) are already in grave danger due to this mob battle, so it’ll be interesting to hear what Portia has to say about that.