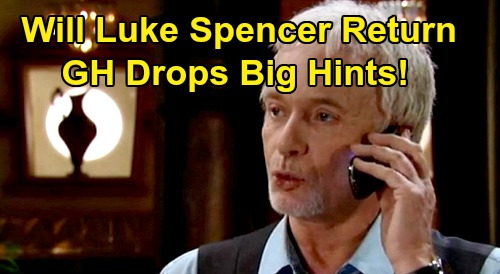 General Hospital (GH) spoilers reveal that hints are dropping about a potential comeback – and it’s a big one. Could Luke Spencer (Anthony Geary) return to Port Charles? There’s nothing official on that yet, but it’s certainly an idea worth considering.

Shortly after Brook Lynn Quartermaine (Amanda Setton) came home, Tracy Quartermaine’s (Jane Elliot) name started coming up a lot. There was plenty of talk about how much Brook Lynn took after Tracy. Soon enough, Tracy herself resurfaced in PC.

GH was clearly setting the stage for Tracy’s comeback with all the hints they offered beforehand.

Could they be doing the thing with Luke now? After Brook Lynn found out Nikolas Cassadine (Marcus Coloma) was alive, she suggested she thought Tracy would want to tell Luke.

Tracy nixed that plan since she figured Lulu Spencer (Emme Rylan) had taken care of it, but it’s interesting that Luke’s name was mentioned. That’s particularly true since Luke has now come up once again.

Tracy admitted to Ned Quartermaine (Wally Kurth) that after she turned down the mysterious investors, they went after Luke. They offered to take care of Luke’s counterfeit tulip problems in exchange for Dillon Quartermaine’s (Robert Palmer Watkins) ELQ shares.

Tracy intervened and is urging Ned to fight for the family legacy. However, the truly intriguing part remains these Luke mentions. Since all the Tracy namedropping led to her coming home, there’s no reason Luke couldn’t reappear, too.

General Hospital is setting up an easy opportunity for Luke to slide right back in. Familiar faces and characters are a great strategy to draw viewers in – especially during a sweeps period.

Could Luke pop back up in time for February sweeps and stir up some trouble? It would definitely be fun to watch! Having both Tracy and Luke back for a bit would be a dream come true for many fans.

Even if they just got Geary for an episode or two, it’d be great to catch up with Luke and see him interact with other Port Charles residents. Whatever the case, General Hospital spoilers say some hot drama’s ahead.

Let’s hope Luke Spencer can come home and be part of it at some point. We’ll give you updates as other GH news comes in. Stay tuned to the ABC soap and don’t forget to check CDL often for the latest General Hospital spoilers, updates and news.