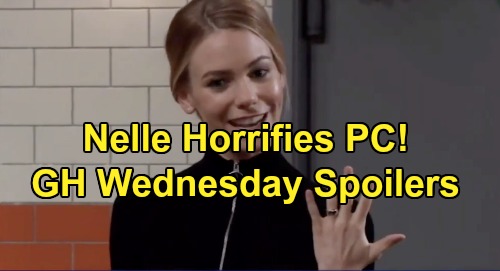 General Hospital (GH) spoilers for Wednesday, January 15, tease that Lulu Spencer (Emme Rylan) will finally get the scoop from Dustin Phillips (Mark Lawson). After that bar brawl got out of hand, Lulu and Dustin were taken into custody along with Brook Lynn Quartermaine (Amanda Setton) and her manager creep. That meant Lulu didn’t have a chance to connect the dots between Dustin and Brook Lynn.

After Dustin and Lulu are released, Lulu will want to get down to the nitty-gritty of his former relationship. She’ll urge Dustin to start at the beginning – and she won’t want him to leave anything out. It’s clear that Brook Lynn still thinks of “Dusty” fondly, so Lulu’s bound to have some concerns about their history.

Other General Hospital spoilers say Brook Lynn will grow frustrated with Ned Quartermaine (Wally Kurth). She’ll yell at Ned to drop their family name and take her home, but Ned may not be so keen on that plan.

Tracy Quartermaine (Jane Elliot) suggested that Ned should let Brook Lynn spend the night in jail, so he may think Brook Lynn’s granny has the right idea.

Ned’s all about tough love these days, but Brook Lynn doesn’t like it one bit. We’ll see if she can convince Daddy dearest to fix this for her on Wednesday. In the meantime, Ava Jerome (Maura West) and Nikolas Cassadine (Marcus Coloma) will face a bit of a stalemate. They don’t trust each other, so that’s making it hard to proceed with the next part of their deal.

There wasn’t time for Ava to arrange a prenup before the wedding, but she intends to make Nik sign all the appropriate paperwork now. Ava will warn that Nikolas isn’t going to get what he wants until she gets what she wants. Nik is still eager to get his hands on the codicil, but he’ll drag his feet on fulfilling Ava’s side of the bargain.

It looks like Nikolas will drop some veiled threats during this chat – mostly just to mess with Ava’s head. However, Ava won’t be fazed. She’ll insist Nik isn’t going to kill her, but Nikolas will wonder what makes Ava so sure.

GH spoilers say Ava will deliver her classic confidence and kiss Nik on the cheek before she leaves. She won’t seem concerned all, but Nik can be awfully crafty. Ava may not have to worry about Nikolas killing her, but she really needs to worry about him stabbing her in the back!

For now, Ava will remain calm, cool and collected as she prepares for an interesting trip.

Over with Stella Henry (Vernee Watson), she’ll talk to Sonny Corinthos (Maurice Benard) about his fading father. Once Stella gets updates on the study Sonny’s interested in for Mike Corbin (Max Gail), she’ll express concern.

Stella will ask what Mike’s holding onto and perhaps make Sonny see that he’s the one holding onto Mike – at least she’ll try.

Sonny will still plan a road trip, but his goal may change somewhere along the way. Instead of taking Mike to this study, maybe this could bring some goodbye scenes essentially. Sonny needs a little more father-son bonding before he can truly let go of Mike.

Nelle will flash her wedding ring as she assures the crowd that she’s Mrs. Archer – and they’re all her guests. Michael Corinthos (Chad Duell) is sure to blow his top – and so will Carly Corinthos (Laura Wright) once she’s brought up to speed.

As for Willow Tait (Katelyn MacMullen), she’ll fret about Nelle potentially coming after “Wiley Cooper-Jones” (Erik and Theo Olson). If Willow knew “Wiley” was actually Nelle’s biological son, she’d have even more to fret about!