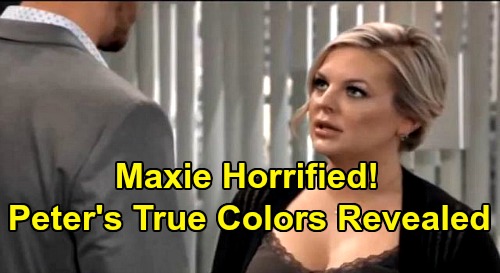 Spinelli will use this breakfast together as a way to fish for more info and plot what’s next. Maxie will undoubtedly gush about Peter being the hero who saved Franco Baldwin (Roger Howath) and Andre Maddox (Anthony Montgomery).

Maxie will probably praise Peter for being so great with James West (Owen and Curtis Rufca) and suggest he should spend more time with Georgie Spinelli (Lily Fisher), too.

General Hospital spoilers say Spinelli will realize things are getting serious. He’ll become even more determined to take Peter down, so GH fans can expect his plan to kick into high gear.

Jason Morgan (Steve Burton) will be a bit wrapped up in all the Corinthos clan drama, but Sam McCall (Kelly Monaco) can pitch in when he can’t. They’ll all want to do whatever it takes to get some solid Peter proof.

Peter will have threats coming at him from every angle since Robert Scorpio (Tristan Rogers) and Hamilton Finn (Michael Easton) will go after Peter, too. They’ll be just as eager to convince Anna Devane (Finola Hughes) that Peter’s bad news.

Since Anna already has suspicions deep down, it may be easier for her to accept the truth in the end.

It’s different for Maxie since she lives with this man and is letting him help raise her child. Maxie will be losing the guy of her dreams if she accepts that Peter’s actually a baddie.

How will Maxie respond once she’s presented with hard evidence against Peter? We all know it’s coming sooner or later!

You can bet Peter will scramble to explain away any red flags that come up. Peter may even argue that Jason and the others are so desperate that they’ve concocted this proof.

He’ll say anything if he believes it’ll help him hold onto Maxie. Peter may act like Jason, Sam and all the rest are trying to poison Maxie against him.

Even if Maxie’s in denial at first, General Hospital spoilers say she’ll have to face the facts eventually. Peter’s true colors will be revealed, so Maxie should unleash her wrath like never before.

Maxie’s “perfect” romance is about to crumble! We’ll give you updates as other GH details emerge. Stay tuned to the ABC soap and don’t forget to check CDL often for the latest General Hospital spoilers, updates and news.