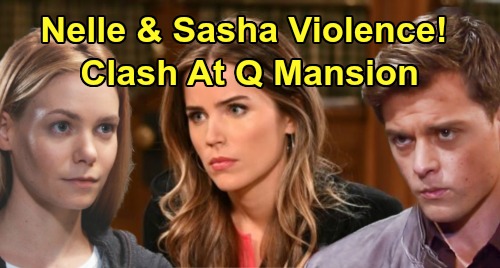 General Hospital (GH) spoilers tease that Sasha Gilmore (Sofia Mattsson) will be determined to help Michael Corinthos (Chad Duell). She’ll agree to move in the Quartermaine mansion with the goal of assisting with the Nelle Benson Archer (Chloe Lanier) situation.

Sasha will think she can pitch in and keep Nelle in line, but Michael will quickly grow concerned about this arrangement.

Although Michael will stick Nelle out in the boathouse instead of the main house, Nelle will obviously find excuses to sneak in the Q manse. She’ll want to drive the Quartermaines up the wall – and drive the price of those ELQ shares up in the process.

However, it’ll soon become apparent to Nelle that Sasha could be a real problem…a problem she may need to get rid of.

General Hospital spoilers say Nelle will cross paths with Sasha once they’re both living on the property. It won’t take long for their faceoff to turn ugly. GH fans can expect some threats to be exchanged.

Sasha will think she can handle Nelle, but she may be underestimating her rival. Nelle’s capable of anything – including murder. All these characters riling Nelle up would do well to remember that.

Michael certainly will once he gets updates on Nelle and Sasha’s latest confrontation. He’ll start to wonder if maybe it was a mistake to let Sasha live so close to Nelle.

Michael would rather put some distance between them and keep Sasha safe, but Sasha will be adamant that Michael’s the one who needs protection. She’ll maintain that protecting Michael is what she intends to do and will be fine. Famous last words!

General Hospital spoilers say Sasha could become more of a target if she’s not careful. It sounds like Sasha’s confidence and attitude will rub Nelle the wrong way.

Nelle likes to think she’s the one in charge. Furthermore, Nelle has never liked the idea of Michael moving on with anyone else. She doesn’t really love Michael, but she still has a strange obsession that she just can’t shake.

Michael’s fears about Sasha could easily be warranted. Will Sasha land in grave danger thanks to Nelle? Could she end up seriously injured or even killed?

General Hospital fans won’t want to miss what’s in store! We’ll keep you posted as other GH news comes in. Stay tuned to the ABC soap and don’t forget to check CDL often for the latest General Hospital spoilers, updates and news.