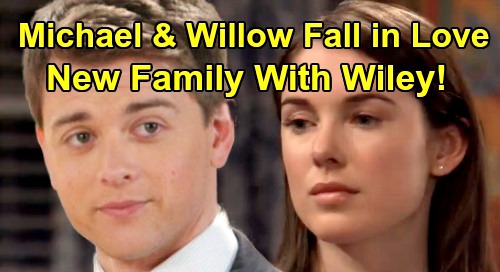 General Hospital (GH) spoilers tease that Michael Corinthos’ (Chad Duell) love life could be moving in a new direction. GH fans know Willow Tait (Katelyn MacMullen) has been struggling since she found out the truth about Wiley Corinthos (Erik and Theo Olson). She’s devastated and confused, so she isn’t certain she should be around Wiley right now.

However, Michael believes it’s best for Willow to stay involved. He made a sweet pitch about how he didn’t expect Willow to step up as a mother, but she could still be like an aunt figure. Michael just feels like Wiley needs Willow’s caring nature – and Michael needs it, too.

The whole interaction felt like GH writers’ way of setting up Michael and Willow as a couple. After all, Michael and Sasha Gilmore (Sofia Mattson) haven’t made a firm decision about what’s ahead.

They’re just taking things a step at a time since Michael’s already got a lot on his plate. They love each other and that’s enough for now, but will it be enough for a long-term future together?

It’s doubtful considering the latest General Hospital spoilers. On March 12, Michael will find something amusing. The next day, Michael will have an emotional conversation with Sasha.

It’s easy to imagine Sasha getting overwhelmed while caring for Wiley and amusing Michael in the process. Things might take a somber turn if Sasha suggests this just isn’t the life she had in mind.

Whatever the case, this emotional conversation probably won’t be an uplifting one. It’ll most likely lead to a breakup, so Willow will be waiting in the wings to support Michael.

Despite her initial resistance, Willow will undoubtedly end up pitching in with Wiley as well. Michael and Willow already have similar personalities, but their shared love for Wiley may be what really brings them together.

Michael understands what Willow’s going through in a way that Harrison Chase (Josh Swickard) can’t. Poor Chase is trying to be there for Willow, but Michael may be the only one who can help mend her broken heart.

General Hospital spoilers, updates and news are definitely leaning toward “Millow” now. It seems likely Michael and Willow will fall for each other, so they may wind up being a happy family with Wiley down the road.

As other news comes in, you can stop by CDL for all the latest General Hospital spoilers and updates. We’ll always have some exciting scoops to pass along!