General Hospital Spoilers: Michael’s Absurd Marriage To Willow – How Much Nonsense Will GH Viewers Accept In The Custody Storyline? 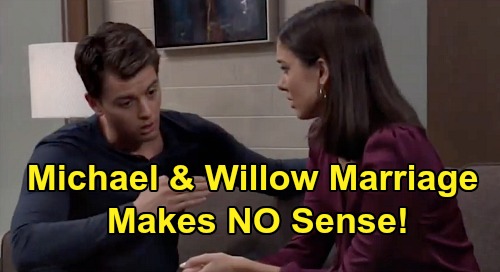 General Hospital (GH) spoilers tease that the custody hearing over Wiley Quartermaine Corinthos (Erik and Theo Olson) will really be heating up in the days to come. As GH viewers know, Nelle Benson Archer (Chloe Lanier) recently skated on all the horrible charges against her – including the charge of trying to kidnap Wiley and take him out of the country. Now Nelle’s suing Michael Corinthos (Chad Duell) for full custody of the little boy.

Well, the custody suit had got everyone who cares about Wiley in a tizzy. Michael is obviously beside himself, as is Carly Corinthos (Laura Wright). And Michael’s closest circle of friends, including Sasha Gilmore (Sofia Mattsson), Harrison Chase (Josh Swickard), and Willow Tait (Katelyn MacMullen) are at their wit’s end trying to come up with some magic bullet strategy that will increase Michael’s odds of winning the custody hearing.

In the newest GH promo, Michael is shown lamenting to Sasha about how his chances in the custody hearing are slightly greater than 50% at this point, which seems very odd given Nelle’s recent criminal history.

But still, Michael’s lawyer Diane Miller (Carolyn Hennesy) has stated numerous times on the show that unless Michael gets married to the perfect woman before the custody hearing, then he risks losing the case.

Let’s think about this for a moment. First off, is the judge really presumed to be so inept that he or she wouldn’t see a marriage that takes place just days before a custody hearing to be a blatant and manipulative tactic?

Do TPTB want viewers to accept that Michael’s chances of getting custody are significantly greater if he marries someone willy nilly? On principle, this just seems ridiculous.

And then there’s the issue of Nelle having legal representation that should absolutely tear Michael apart on the stand, bringing out the fact that the marriage is a total sham.

It’s well-known around Port Charles that Michael and Sasha are dating and are in love, and this would certainly be brought to light by Nelle’s representation, who is apparently going to be shark lawyer Martin Grey (Michael E. Knight).

There’s just no way that Martin is going to let the judge get by with thinking that Michael marrying anyone other than Sasha is legitimate. But of course, TPTB would have us believe that Sasha is wholly inappropriate for Michael to marry because of her past in defrauding Nina Reeves (Cynthia Watros). Yet Nelle, who has served time Pentonville for attempted murder, has a nearly 50% chance of winning custody.

And then there’s the issue of who Michael will likely marry, if he does get married before the custody hearing. It’s Willow, who was previously jailed for contempt of court and who was part of the inner circle of an established cult, Dawn if Day.

Again, if Willow’s really the choice here, then wouldn’t Martin fire right back that Willow wouldn’t be a good influence on Wiley? It might not be fair, but surely Martin would make hay of the fact that Willow was part of a cult.

It just seems a little weird for the show to expect viewers to accept that Michael marrying Willow would make all the difference in the world in the custody hearing and that it wouldn’t totally backfire on his case.

Yet that seems to be where the drama is currently headed – with Michael and Willow getting married as a last-ditch tactic to save the day and win custody of Wiley.

What do you think about all this? Do you believe that Michael marrying Willow will really help his chances of winning full custody of Wiley? Stick with General Hospital and keep CDL bookmarked for all the hot GH news, recaps, and spoilers.

“This has everything to do with Wiley!” #GH pic.twitter.com/i0YNCfESx6