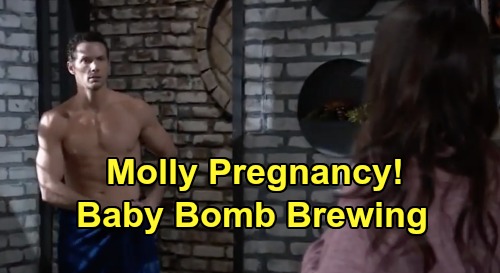 General Hospital (GH) spoilers tease that Molly Lansing-Davis’ (Haley Pullos) secret hookup will come back to bite her. GH fans know Molly shared a hot night with Brando Corbin (Johnny Wactor), which she now regrets. Once Molly realized TJ Ashford (Tajh Bellow) was kidnapped and hadn’t broken up with her, she was adamant that Brando should just forget their mistake.

Of course, Brando’s not doing a very good job of that! After Brando headed back to the auto garage, he couldn’t stop thinking about Molly. Now that General Hospital’s set up this secret, there’s only one thing to do: pave the way for it to explode! GH will want to let this hookup secret simmer for drama’s sake, but you can bet it’ll come out eventually.

However, Molly seemed genuinely rattled and remorseful. Brando may be focused on Molly, but she’s focused on TJ and how glad she is he survived. Molly doesn’t seem to view Brando as anything more than a one-night stand just yet, which could reduce temptation on her end.

In other words, Molly may truly believe she can sweep that hookup under the road and move forward. If that’s the case, General Hospital may need another way to expose this shocker. A surprise pregnancy might be the perfect strategy.

Although Molly’s the kind of gal who would be diligent about birth control, she wasn’t quite herself when all this went down. It’s not crazy to think Molly might’ve been pretty scatterbrained and missed a few doses.

Then again, we all know how easy it is for birth control to fail on soaps. If GH writers want to make Molly pregnant, then they will. It won’t really matter whether any form of birth control was used. Will Molly’s night with Brando come back to haunt her in the form of a baby? It’s certainly an option to consider since it would lead to some fantastic drama.

If Molly finds out she’s pregnant, she could decide to terminate the pregnancy. What would Molly do if TJ discovered the baby news and got all excited? Molly herself might even be torn. After all, Molly couldn’t be sure of the baby’s paternity at this point.

TJ’s hasn’t been gone that long in terms of soap time, which works differently than real time. Curtis Ashford (Donnell Turner) suggested TJ had been missing for “days,” so TJ could easily still be a “baby daddy” candidate. That would definitely complicate things.

Regardless, Brando is in the mix as well and that could prove terrifying to Molly. GH has set up the option of Molly getting some shocking baby updates, which she obviously wouldn’t welcome!